From the late 1800s to the middle of the next century, the Anaconda Copper Mining Company (ACM), headquartered in Butte, Montana was one of the largest mining companies in the world, and the ACM Lumber Department was the largest lumbering operation in Montana. They had around five hundred loggers working in the forests and an equal number of employees working in their mill in Bonner, east of Missoula.

The General Manager of the ACM Lumber Department from 1900 – 1926 was a man by the name of Kenneth Ross. One day in 1919, Ross was on an inspection visit of their headquarters logging camp in the Nine-Mile Valley west of Missoula, when he ran into an old acquaintance by the name of Ruth Worden, who was the Missoula County Librarian. She inquired whether the lumber company would like some books for the loggers to read in the logging camps. Ross thought that the proposition would be more trouble than it was worth, and was annoyed by the idea, but because he knew Miss Worden and didn’t want to offend her, he agreed that if the clerk at the logging camp wanted to take responsibility for the books, then it would be okay with him.

It wasn’t much longer after that that Miss Worden showed up at the mill in Bonner and asked if she could supply books for the sawmill workers. Again, Ross was annoyed by the idea but agreed to let some books be placed in the care of the company storekeeper.

The persistent Miss Worden wasn’t through with Ross yet. She showed up in Bonner not long after and informed him that the store was not a sufficient place to keep and distribute the books and that other arrangements would need to be made. More in an effort to be rid of the “meddlesome” librarian than out of any desire to provide a library for the sawmill workers, Ross told Miss Worden that he would take charge of the books himself; then he promptly rented a room in a local hotel and hired a young lady to act as the librarian for him. Washing his hands of the whole business, he walked away and didn’t give it another thought.

It wasn’t until the end of the year before Ross had to face the issue of the library again, but this time he had a drastic change of heart. It happened when he was handed two different reports, one from the Bonner library and another from the logging camp library. He discovered that at the Bonner Library, over 4,000 books had been read by the sawmill workers. The Logging camp library was enjoying comparable popularity. Ross had witnessed an improvement in the relationship of the workers with the company and believed that it was largely due to the education that his employees were getting from the library. 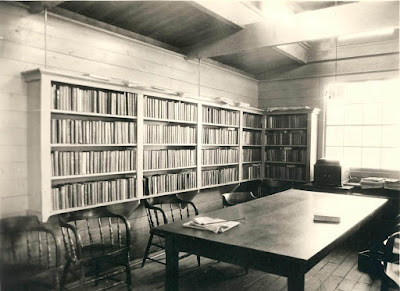 Building on this success, in 1921 Ross commissioned the construction of a railroad car that would serve as a mobile library, capable of visiting the various logging camps and distributing books to the loggers. The special car was to be 14 feet wide and 40 feet long and contained a stove, electric lighting, a table with comfortable armchairs, a Victrola, separate sleeping quarters for the librarian, and over 1,400 books, newspapers, and magazines.

Dubbed the “Lumberman’s Library,” this first edition bookmobile was painted gray and had a placard on the side that said “Missoula County Free Library.” Most of the books were donated, but a number of them were purchased by Miss Worden out of a fund of four-hundred dollars that the lumbermen and mill-workers donated themselves. 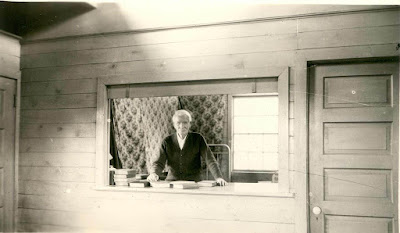 By the 1940s, library visitors had declined to half their earlier numbers, due primarily to the popularity of radio to pass the time, as well as better roads and the availability of automobiles for travel. The Lumberman’s Library was taken out of service in the late 1950s. Today, you can see the restored Lumberman’s Library on the grounds of the Historical Museum at Fort Missoula. 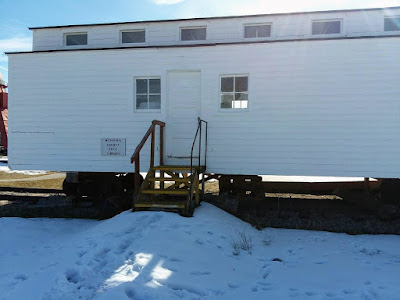 The Library car at the Historical Museum at Fort Missoula 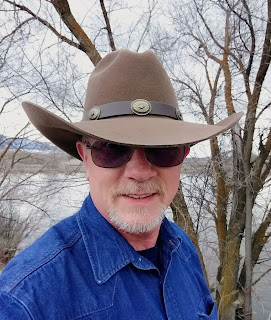 Mike is an award-winning Western author currently living in a 600 square foot cabin in the mountains of Western Montana. He has been married to his redheaded sweetheart, Tami, since 1989. He is a Western Fictioneers Peacemaker Award Finalist three years in a row and his short stories have been published in numerous anthologies and are available through Amazon, Barnes and Noble, and other online retailers as well as brick and mortar bookstores. His first Western novel, The Sons of Philo Gaines, was released in November of 2020. It is available everywhere books are sold. Mike is a member of Western Writers of America and Western Fictioneers. You can find him on Facebook at https://www.facebook.com/MichaelRRittAuthor, or at his website https://michaelrritt.com.
Posted by Michael Ritt at 2:00 AM