Available on Amazon.  Barnes and Noble and a trade paperback will be coming soon.
Posted by Western Fictioneers at 5:00 AM 3 comments:

What was your first Western novel or story and was it published? The first western novel I did was one I called Texas Tornado.  This was before I’d published anything at all, and it was never published, either.  However, several years later I told my agent that I’d always wanted to write a western.  She said, “Go ahead.”  I wrote Ryan Rides Back, and the agent sent it to Sara Ann Freed at M. Evans.  Sara Ann bought it, and I decided to write another one.  I pulled out the old Texas Tornado manuscript, threw out some of the plot and characters and put what was left into one called Galveston Gunman.  Years after that I was asked about writing a house-name western, and most of the rest of Texas Tornado went into that one.  So while the first western I wrote didn’t get published as it was, a lot of it eventually saw print.

What Western writer or writers of the past were the biggest influence on your work? Harry Whittington, Donald Hamilton, Brian Garfield, and Elmore Leonard.  I don’t write like any of them and I don’t write half as well, but I loved their books.  Still do.
What's the first Western you remember reading from cover to cover? Will James’ Smoky the Cowhorse.  I got it from the library when I was seven or eight and read it several times.  We didn’t have many books in the house, but one slim one my parents bought me, maybe before I read Smoky, was called Little Bear’s Pinto Pony.  I must have read that one dozens of times.  I still have it.
Who is your favorite historical Western figure, and why? Buffalo Bill, the legendary one, not the historical one.  My parents had something to do with that, mainly because of my name.  They talked about Buffalo Bill a lot, and they gave me a little book with a story about him in it.  I lost that one somewhere along the way, but I still remember a couple of the pictures in it.
How much historical research do you do, and how do you go about it? It depends on the book.  I did a lot of research for Galveston Gunman, and it’s probably my most historically accurate western.  Sometimes I rely more on what I remember from books I’ve read or movies I’ve seen.  I probably shouldn’t admit that.
Do you do all your research ahead of time, or as you go along? Usually I do the research beforehand.  That’s how I did it with Galveston Gunman.  I had stacks of books all over the place as I was writing, however, so I could refer to them.  Maybe I do some research as I go along, after all.
Do you outline and plot your story or do you write as the inspiration or MUSE leads? I’m a seat-of-the pants kind of a guy.  I start with a vague idea, maybe a scene or even just a sentence, sit down, and start typing to see what happens.  Usually a book comes along and fills the pages.  I’ve discovered that by the halfway point, I know pretty much what’s going to happen the rest of the way, but sometimes surprises happen even then.
Are you a conservative in your writing and stick with traditional ideas for your characters and plots or do you like to go beyond the norm and toss in the unexpected and why? I do whatever I want to, so sometimes odd things occur.  I’ve never had singing pirates on the prairies like some people I could name, but I probably shouldn’t even mention that lesbian vampire cannibal western.  I blame James Reasoner for that one.
Do you need quiet when you write, listen to music, or have the TV on and family around? There was a time when I wrote with music playing on the computer and a baseball game on the radio.  Now that I’m an old codger, I often don’t have those distractions.  My wife still feels free to interrupt at any time, however.
Do you make a living writing? If not, what is your day job? Until I took early retirement, I was a college English teacher and administrator.  I was writing three or four books a year, writing only in the evenings.  Now that I’m no longer teaching, two books a year is about what I do.  I’ve gotten old and lazy.
What are you writing now, or plan to write in the future? I turned in a book in my Sheriff Dan Rhodes series (a contemporary crime series) on June 1.  Since then, I’ve been on vacation.
Posted by Western Fictioneers at 6:00 AM 3 comments:

What was your first Western novel or story and was it published? My first Western novel was Vulture Gold. I wrote it in 1979 and entered it in a Louis L’Amour write-alike contest. Didn’t win. Decided I wasn’t cut out to write fiction and continued as a journalist, magazine feature writer, copywriter, and corporate literature writer. I don’t remember why I dusted the manuscript off and input it (it was written on an IBM Selectric). But I sold it to Black Horse Westerns in 2004. It was published in 2005, and republished in 2011. It is now available in several eBook formats and in print. Originally, the book was about 70,000 words long. Now it is 45,000 or so. 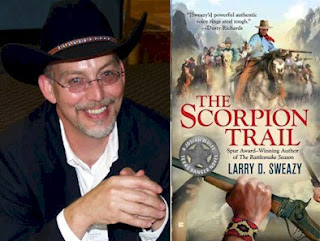 Larry D. Sweazy's novel, The Scorpion Trail (Josiah Wolfe #2), has won the 2011 Will Rogers Medallion Award for Western Fiction.
The Will Rogers Medallion Award is presented each year to those books that represent an Outstanding Achievement in the publishing of Western Literature. They are books that exemplify outstanding excellence in content and design with an enduring quality that preserves and celebrates the history and spirit of the West and the memory of Will Rogers.
Congratulations Larry!
Posted by Livia J Washburn at 5:00 AM 7 comments:

Submissions for the WF Peacemaker Awards are being accepted for works published in the year 2011. Rules, judges, and submission forms can be found on the WF Website.
Posted by Livia J Washburn at 8:59 AM No comments: