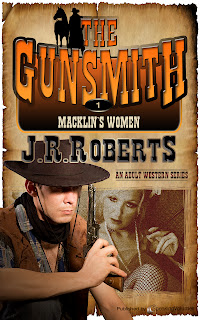 Little did I suspect, 30 years ago, when THE GUNSMITH #1: MACKLIN'S WOMEN came out, that it would be reprinted 30 years later--both as print and as an e-book.  But here it is, appearing as of Oct. 2011.  From that point on Gunsmiths will continue to appear until the first 200 are available as ebooks. #2 THE CHINESE GUNMAN will appear in Nov.  In Dec. the first books in the ANGEL EYES and TRACKER series will appear, and then GUNSMITH #3: THE WOMAN HUNT in January.  The Gunsmith books will continue to appear as by J.R. Roberts, but Angels Eyes, Tracker and Mountain Jack Pike series will appear as by Robert J. Randisi writing as . . .

In any case, shared here for the first time, the cover of Gunsmith #1--which will also be the cover of the POD trade paperback, and the Audios which will appear in January and February. 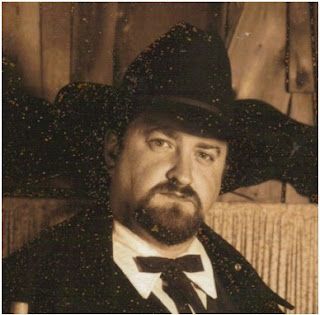 My first two Western novels, Riding to Sundown and Brothers in Arms, were written in 1990... purely for my own entertainment. In those days I buffed and waxed floors for a living, and would be locked in Wal-marts and K-marts alone for up to twelve hours a night. I wasn’t paid by the hour, and it only took about half the time to do the work, so I wound up writing to occupy myself. It never even occurred to me at the time I could be published. A few years later I got serious about writing, and decided to do a few short stories to see if I could get them published and at least have something on my query letter when I tried to sell my novels. My first short story was accepted at Louis L’Amour Magazine; they took several others too, and I thought I’d found my gravy train, but then the magazine folded right after my first story appeared. I kept selling stories, though. In the past year a lot of my older stuff has been reprinted by Western Trail Blazer, and those first two short novels I wrote while my wax was drying twenty years ago finally got into print for the first time. 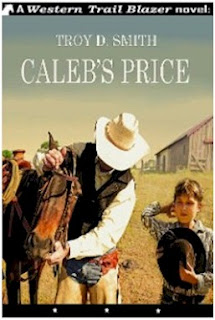 2.   What Western writer or writers of the past were the biggest influence on your work?

Louis L’Amour was a big influence; I’d been reading his novels while locked up in those stores before I ran out of books and started writing my own. I also loved Elmer Kelton, and often paraphrase his great quote: he didn’t write about a bad guy in a black hat versus a good guy in a white hat, he wrote about two guys in gray hats, one trying to institute change and one resisting it. I like that. I was also influenced by Larry McMurtry; I like the way he plays with history, and how he uses humor to endear characters to you before he suddenly visits horrific death and destruction on them, making you care deeply about their fates. Beyond that, I could name a whole slew of writers active in WF right now as big influences, and dozens of classic writers –from Mark Twain, Stephen Crane, and Steinbeck to Stephen King, Robert E. Howard and Stan Lee.

3.   What's the first Western you remember reading from cover to cover?

Bowie’s Mine, by Elmer Kelton. I read it in 1976, when I was eight… it was the first “grown-up book” I ever read. I read it over and over, in fact, and can still remember the opening scene in great detail.

4.   Who is your favorite historical Western figure, and why?

This one is a tie. Crazy Horse is inspirational; he fought for his people and culture, and in innovative ways, even when many of them abandoned him. I am also quite fond of Bill Tilghman; he saw it all. Serving as a lawman in Dodge City with Earp and Masterson, federal deputy marshal in Oklahoma Territory, and still taming oil boomtowns when he was an old man in the 1920s. He had a sort of quiet efficiency that got the job done while more boisterous attention-seekers got all the fame and glory.

5.   How much historical research do you do, and how do you go about it?

It helps that historical research is my day job. I spent several years familiarizing myself with 19th century Indian Territory / Oklahoma for my dissertation, and I plan to use that in future fiction works. Generally speaking, though, it depends on the project. If I am writing about a historical figure like Champ Ferguson, I want to get all the details down right. For Bound for the Promise-Land I spent six months doing nothing but research, filling up several notebooks and poring through slave narratives before I wrote my first sentence of narrative. I spend a lot less time on a typical adventure story, but I still read a lot to make sure I know the difference between point and drag, gee and haw.

6.  Who is your favorite fictional character that you have created?

This one is a tie, too. Both my favorite creations were supporting characters in Civil War epics, and each served as a conscience for the hero. As such, they were intrinsically good people, and therefore (to me, at least) very lovable. The first is Lonnie Blake, ex-slave-turned-soldier-turned-preacher in Bound for the Promise-Land. I wanted my hero, Alfred, to be a sort of everyman, and torn by conflicting emotions about life and about racial issues. His two best friends, Lonnie and Chamas, played the roles of Martin Luther King and Malcolm X, each trying to sway him to their perspective. Lonnie was the MLK figure, and –while a flawed human being –approached life with love, compassion, and faith. My other favorite was not quite so saintly –Rains Philpot was the sidekick of Champ Ferguson, the notorious Confederate guerrilla that I wrote about in Good Rebel Soil. I wanted to structure Champ’s story like a Greek tragedy: a brave, and likable, hero who has a fatal flaw (in Champ’s case, his angry passions) which draws him inexorably to a doom that he knows he can’t escape no matter how hard he tries. Rains is kind of simple-minded, intensely loyal to his friend, and –despite the band’s violent activities –kind of an innocent. It’s his voice that tries to pull Champ back from the abyss when he goes too far. I had a soft spot for him –although his positive qualities were entirely of my own invention, for the sake of a good story. I’m pretty sure the real Rains Philpot was just as ruthless as Champ.

7.   Who is your favorite fictional character that someone else created?

Oh, hands down, Augustus McRae from Lonesome Dove. They just don’t come any better than Gus. Although I also have a soft spot for Hewey Calloway, Elmer Kelton’s great cowboy character.

I am a history professor, currently teaching at Tennessee Tech. My dissertation, which I hope to publish soon in book form, is about the Five Tribes of the Southeast (and later Oklahoma –Cherokees, Choctaws, Chickasaws, Creeks and Seminoles) and the process by which, in the first half of the 19th century, they adopted plantation slavery and developed racial concepts unknown to previous generations in their leaders’ quest to become “modern,” eventually allying (for complicated reasons) with the Confederacy during the Civil War. I explore what that whole process says about the connections between racial identity and national identity, and how each is formed. This pulls together my three fields of research: American Indians, slavery, and Southern history (Western history, too.)

My next big fiction project will be a crime novel. I plan to write several short stories before that, though, to be included in various series of ebook shorts. I’ll do a couple more tales for the Blackwell Western series being published by WTB, as well as a couple of mystery series which should be available in the next few months. One stars a 5th century Irish chieftain, Conor Mac Cormac, who has a tendency to get involved in political intrigues in the days of the late Roman Empire –where the murders are never as simple as they seem. The other series will be called “Dead Rednecks!” and centers on an ex-con in Knoxville, Hoss Qualls,  whose efforts to keep his nose clean are complicated by his many crazy relatives, especially his semi-delusional brother who has opened a detective agency and constantly needs Hoss’s help. Right now I am working on a story for an upcoming Lone Ranger anthology.

10.   What made you decide to write Western fiction?

I actually write in various genres: Western, mystery, sci-fi/fantasy, and horror. What success I have had, though, has mostly come from Westerns, and I don’t think that is an accident. I like to write about characters who face their most primal emotions. A story set on the frontier is very conducive to that; the veneer is stripped away, and the primordial comes to the surface. You can cut through the crap, in other words, and pretty darn quick.