We're in the final stretch of 2022. I don't know about you, but it seemed to fly by. I thought for my final post of this year I'd take a look back and take care of some odds and ends.

First, I apologize for not getting the author interviews out as I had anticipated. Rest assured, I will return to that project and make sure those interviews are shared.

Second, in August I wrote about Dr. Henry H. Hewett. I found him. Most of the information I gleaned was from the Don and Jean Griswold books on Leadville, CO. What I did find, he evidently married at some point prior to his death in a stagecoach accident. He was taken to Denver, CO. where he passed away from his injuries. I found his headstone in Riverside Cemetery in Denver CO. His death date is listed as September 28, 1887.  The following photo can be found on the Find A Grave website for Dr. Hewitt.

Third, I was able to republish "Chasing a Chance" with a new cover for the paperback. I also published "Under the Stone: Early Women Doctors in Evergreen Cemetery" and "52 Haiku- Reflections From a Life in Colorado".

And lastly, I had hoped to post more than one marketing post on my blog, but the best-laid plans of... It is my goal to do more than one for 2023.

Here's to the end of one year, and the beginning of another along with some great stories and other work from all of you.

Posted by Renaissance Women at 4:00 AM 6 comments:

WESTERN CHRISTMAS ART TO MAKE YOU SMILE by Cheryl Pierson 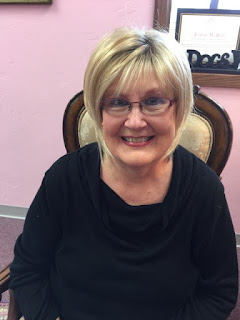 It's the middle of December, and Christmas is only a few days away--that means that in less than two weeks, we'll be saying goodbye to 2022 and hello to a brand new year.

I love Christmas artwork of all kinds, but especially the western kind. So today I want to show off some of my favorites by Jack Sorenson. I just love his paintings--so detailed, and with such movement and stories to tell us! Take a look! 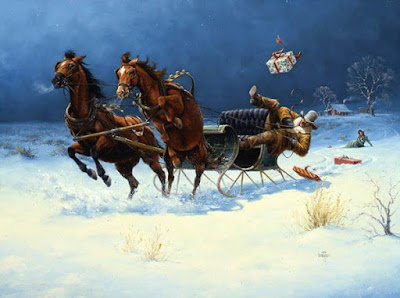 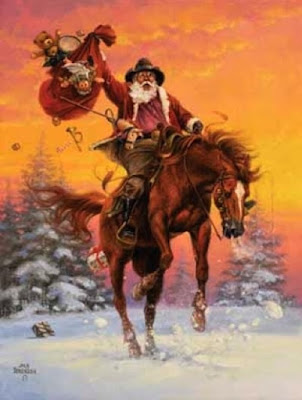 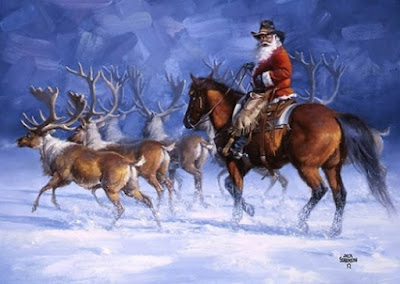 This has got to be my all-time favorite! 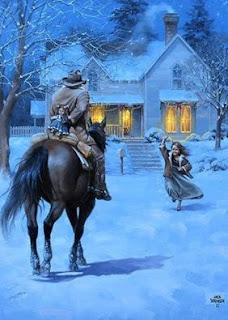 Here's hoping each and every one of you has a very Merry Christmas and a Happy New Year, and that 2023 brings us all--personally and professionally--the best of everything we could ever hope for. MERRY CHRISTMAS! 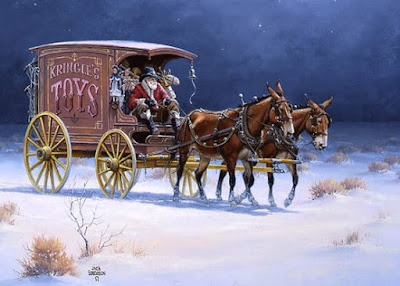 (All illustrations by Jack Sorenson)

In time for the last-minute gift buying.  Below are some of the offerings from 2022 by our authors just in time for the Holidays:

Wild and Mean, Sharp and Keen, Redemption, Dead or Alive

Blue is Not the Word/Buckskin Train (two short stories)

The Good Lawman and Other Western Stories - John Porter 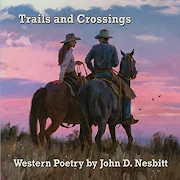 And for the truly International

I do hope you enjoy the options for some amazing stories
for your gift selection or for yourself. Happy Reading
and HAPPY HOLIDAYS!
Doris

On This Day in the Old West: December 9

This month, we’re looking at celestial events. On December 9, 1805, Comet 3D, later known as Biela’s Comet, passed closest to Earth (0.04 AU) during its second discovery by astronomers. An AU, or Astronomical Unit, is measured as the distance from Earth to the sun. This comet, with a magnitude of between 4 and 5 in November (as reported by Jean Louis Pons of Marseille, France), displayed a coma, but no discernible tail. On December 9, it was brighter, and was visible until December 14.

According to NASA, “comets are frozen leftovers from the formation of the solar system.” They are formed of dust, rock, and ice, and can range from a few miles to tens of miles wide. As comets draw closer to the sun, they heat up, spewing gases and dust into a glowing “head” that can be larger than a planet. This material forms a “tail” that stretches for millions of miles. There are probably billions of comets orbiting the sun in the Kuiper Belt and distant Oort Cloud, however, scientists have only categorized 3, 743 to date.

Astronomer Gerard Kuiper theorized in 1951 that a disc-like belt of icy bodies exists beyond the orbit of Neptune, in the realm of Pluto. These are the so-called “short period comets,” taking less than 200 years to orbit the sun and becoming predictable by astronomers because of their frequent appearance. Less predictable comets, the “long period comets,” come from a region called the Oort Cloud about 100,000 AU from the sun. These Oort Cloud comets can take up to 30 million years to complete one trip around the sun.

In the past, people were both awed and alarmed by the appearance of a comet. Chinese astronomers kept extensive records of cometary visitors for centuries, including illustrations of the types of comet tails, times of appearance and disappearance, and celestial positions. These historic documents have proven a valuable resource for later astronomers. Comets are generally named after their discoverers, although sometimes the actual discoverer is in dispute Comet 3D was “discovered” twice before Wilhelm von Biela put his name on it in 1826, when he established a short-period orbit and proved it was the same comet seen twice before.

Comets have been referred to as “dirty snowballs,” and may have brought water and organic compounds to the early planet earth and other parts of the solar system. Each comet has a tiny, frozen part called a nucleus, often only a few kilometers across. This nucleus contains icy chunks and frozen gases with bits of embedded dust. As the comet nears the sun and starts to warm, it develops an atmosphere or coma. The heat melts the ices to form more gases, so the coma gets larger the nearer it comes to the sun. The solar wind (high-speed solar particles streaming from the sun) can blow the coma’s dust and gas away from the sun, sometimes forming a long, bright tail. Comets actually have two tails: a dust tail and an ion or gas tail.

In 1846, Comet 3D, or Biela’s Comet as it was then known, surprised astronomers by having split into two pieces. They were able to follow the brighter nucleus from mid-January to April 27, though they lost the smaller nucleus at the end of March. In 1852, Biela’s Comet was seen in August, with only one nucleus visible until September 15, when the fainter second nucleus was finally detected. After this orbit, the comet was never seen again. The 1859 apparition was unfavorable, so it would not have been seen anyway, but that of 1866-1866 was very favorable. Astronomers hunted in vain for the comet, finally assuming it must have continued to break up until it could no longer be considered a comet. Interestingly, at the comet’s next expected return, in 1872, a major meteor storm occurred on November 27, with hourly rates peaking at 3,000. Calculations revealed that the storm likely came from the orbit of Comet Biela. Intense meteor displays were also noted during the comet’s expected returns in 1885 (15,000 per hour), 1892 (6,000 per hour), and 1899 (150 per hour). After that, there were no notable meteor storms and later searches for the comet (even as late as the 1970s) were unsuccessful.

Your character might easily have seen this, or another, comet in the night sky. If the dates were right, they could have been awed by the intense meteor storms as Biela’s Comet broke up. Celestial objects have always been a source of awe (and often alarm), and your character might experience either emotion depending on their education and philosophical bent. Including actual historical data like this makes a historical fiction story more realistic, especially if the readers take time to look up the event and read more about it. You can find more information about comets and other celestial bodies on the NASA websites (I used solarsystem.nasa.gov for comet research).