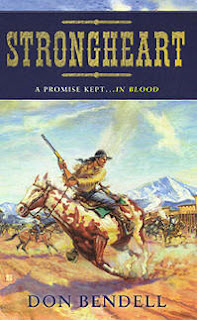 Don Bendell had been writing mystery/thrillers until his editor mentioned that he might go back to Westerns. It seems the recent success of the remake of “True Grit” has brought sales back again for novels of the American West.
Synopsis
A son of both Lakota and white worlds, Joshua Strongheart has two prized possessions--his father's Bowie knife and his stepfather's Colt .45 Peacemaker, entrusted to him by his dying mother.

In the Colorado Rockies, Strongheart falls prey to the cold-blooded McMahon brothers who steal his pistol and knife.  The brothers are unaware that hidden inside Josh’s money belt are crucial War Department documents, signed by the President, ordering a fair trial for Captain Jack, Chief of the Modoc tribe.  Josh must recover both his birthrights and the secret papers before violence erupts across the West.
Excerpt from Strongheart
“Joshua stared into the eyes of Long Legs and the tall man got very nervous. He could see this man was trouble, wounded or not.
Westbrook said, “You’re barely able ta stand partner. Drop the hogleg, an I’ll let ya live.”
“Mister, you’ll never touch that woman while there is breath in my body,” Joshua said, “You gonna start the ball or are you gonna talk me to death?”
He saw the ears on Westbrook’s magnificent paint horse shoot forward honing in on something coming down the stage coach road behind him. He figured the gang came back and was slowly moving up behind him.
Joshua made a decision, he fired, fanned the hammer back and fired again, and saw a large stain of crimson in the center of Long Leg’s chest as he fell back dropping his gun. Joshua immediately went to the ground rolling to his right toward the bloody corpse of Chancy, but on his way down he felt a bullet slam into the back of his left shoulder which spun him. He crawled forward quickly to Chancy’s body and drew his gun and spun around, as another bullet slammed into his right thigh. He saw both Stumpy Shaw and Slim Dyer. One held a Winchester and the other a six-shooter.
Instead of firing wildly Joshua knew he had to save the woman no matter how many bullets hit him. He forced himself to stand and fired first at Dyer, the rifleman, and hit him in the right hip, and then a second shot hit Dyer right on the face tearing his lower jaw off. His eyes rolled back in his head, and he fell back dead.
Stumpy Shaw looked over and was terrorized by the sight of his dead riding partner, and he fired as quickly as he could, one bullet hitting Joshua in the upper left arm. Joshua pointed, aimed, fired, and the bullet hit Shaw in the right cheek, breaking the cheekbone and tearing the man’s ear off. Strongheart limped forward fanning the hammer back to a cocked position, and he squeezed a shot from the hip which hit Shaw’s upper torso center mass.
The outlaw thought to himself. “I’m dead,” and that was his last thought as his back slammed into the rocks.
Now, Joshua turned, and barely able to walk, started towards Long Legs. Annabelle ran forward, tears streaming, “Oh Mr. Strongheart. You have been shot over and over.”
He grinned, “They are just little holes in me. Don’t worry.”
Then he fell forward into her arms in a faint. His weight took both of them to the ground. She tried to lower him as gently as she could while falling with him on top of her. He opened his eyes, and was an inch from her face. They stared briefly into each other’s eyes, and he smiled.
“Annabelle,” he teased, “We just met.”
He stood, and she grinning, jumped up, helping him raise up on wobbly legs. She immediately started tearing shreds from her petticoat and started bandaging his wounds. Joshua smiling pushed her aside.” 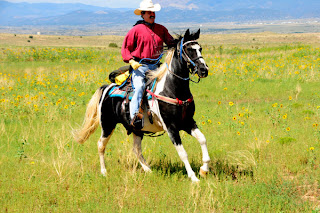 Author Bio
Don Bendell is the top-selling author of 25 books, a television pilot, and a feature film, with over 2 and a half million copies of his books in print worldwide. He is also a producer, director, actor, stuntman, cowboy, poet, and speaker. Skilled in tracking, the former US Army Special Forces (Green Beret) officer, big game guide, and bow hunter, is often called upon, and has had success in, searching for missing hikers, hunters, prized animals, and fugitives.
Don is a 1995 inductee into the International Karate Hall of Fame and 1996 inductee into the Martial Arts Museum of America.  He owns and operates two karate schools in southern Colorado. He has served on the National Advisory Board of the American Indian Registry for the Performing Arts along with such notables as Burt Reynolds, Wayne Newton, Will Sampson, and Jonathan Winters. In 2007, Don was honored in a speech by US Secretary of Veterans Affairs James Nicholson along with NFL Hall of Fame quarterback John Elway.  He has worked extensively with Vietnamese Montagnard refugees and on Montagnard issues and has also been listed in Marquis' WHO'S WHO IN AMERICA and WHO'S WHO IN ENTERTAINMENT since 1992. Don is Past President of the Rocky Mountain Chapter of the Special Forces Ass'n where he is a Life member, is a member of the Special Operations Ass'n, Life member of VFW, American Legion, Life member of DAV, and is a Disabled Vietnam veteran. A former member of the International Platform Ass'n, and is a member of the Western Writers of America, where he was nominated for Spur Awards for 4 of his 10 Western novels. He is also a member of the Military Writers Society of America.
Don was appointed to the Colorado Governor's Council on Physical Fitness by former Governor Bill Owens and reappointed to the Council by current Colorado Governor Bill Ritter. Don has also testified for the Colorado Legislature on a bill about Search and Rescue and another bill Don had first suggested to Representative Tom Massey about economic and other incentives to attract film and TV producers to Colorado. Both bills were passed and made into state law.
A graduate of Colorado Christian University with a degree in Business, Don is currently in graduate school at Grand Canyon University in Phoenix pursuing a Master of Science in Leadership. Don is the father of 6 grown children and grandfather of 8. Don rides a big pinto National Showhorse named Eagle, and he and wife Shirley own the Strongheart Ranch south of Florence, Colorado. Don is currently writing westerns after publishing several military thrillers through Berkley Books (Penguin Group-USA) and is represented by the John Talbot Agency, Inc.


Amazon buy link:
Posted by Western Fictioneers at 4:00 AM