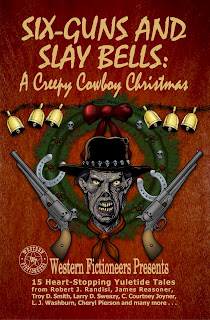 Put on your Santa hat and saddle up for this collection of creepy Christmas stories from the Western Fictioneers, the world's only organization of professional authors devoted solely to Western fiction. 'Tis the season for ghosts, vampires, monsters, aliens, and other bizarre creatures to make these Old West holiday tales truly special. Legendary Western author Robert J. Randisi spins the spectral yarn of "Sheriff Santa and the Ghost of Two Gun Jim". Peacemaker and Spur Award winning author Troy D. Smith takes the reader on a murderous Christmas journey to "Bitter Mountain". New York Times bestseller and Peacemaker Award winner James Reasoner writes about a strange encounter on the Staked Plains in "Presents for One and All". Larry D. Sweazy, two-time winner of the Will Rogers Medallion Award for Western fiction, tells the story of an epic battle between good and evil in "The Longest Night". An isolated stagecoach station under siege by Apaches is the setting of Cheryl Pierson's "The Keepers of Camelot", a tale of rebirth and redemption. These and many other stories by some of today's top writers in the Western field make SIX-GUNS AND SLAY BELLS the most unusual Western Christmas anthology ever published.

SIX-GUNS AND SLAY BELLS is the newest anthology from the Western Fictioneers.  Founded in 2010 to promote the oldest genuine American art form, WF is the only writers organization composed entirely of professional authors of traditional Western fiction.  Its worldwide membership includes best-selling, award-winning authors as well as the brightest up-and-coming new stars in the Western field.

Western Fictioneers previously published THE TRADITIONAL WEST, the largest anthology of all-original Western fiction ever published, which met with critical acclaim and included the Best Short Fiction winners of both the Peacemaker Award, given by WF, and the Spur Award, given by the Western Writers of America, as well as several other finalists for those awards.  Earlier this year WF published BLOODY TRAIL, the first book in the Wolf Creek series of collaborative novels with more to come.

Barnes & Noble
Posted by Western Fictioneers at 7:51 AM