A VETERAN'S THOUGHTS ON VETERANS DAY by ROBERT VAUGHAN

I stood at the top of the incline, looking toward the long, black wall, with the more than 58,000 names just a blur. I watched people moving slowly along the wall…from those too young to have any memory of the Vietnam war, to those people whose hair had been bleached white by the passing of too many years.

Sometimes there would be a couple of men staring at the wall, engaged in quiet conversation.

“I don’t believe Smitty ever bought a cigarette of his own.”

“No, but he was a good man. You needed somethin’ done, you could always count on Smitty.”

“Problem with him, he couldn’t keep his mouth shut. He was always talkin’ himself into trouble.”

“He only had three weeks ‘till his drop date when he was killed. Can you believe that? Three weeks.”

Ruth had gone to check in the book to help me locate some of my friends. They aren’t listed alphabetically, they are on the wall chronologically, according to when they were killed.

She came back with the names. The first name was Dan Lambdin. Dan and I were friends from Germany, in Vietnam at the same time, but not serving together. I found his name on the wall, and, as dramatically as if it were a scene change in a movie…the wall, the people around me, tone and tint, disappeared. I could hear the sound of rotor blades, I could smell jet exhaust, I could feel the oppressive heat of the flight line at Phu Loi, Vietnam.

Dan was in Vung Tau, and I had flown over from Phu Loi to deliver a helicopter. Dan’s roommate was gone, so he invited me to stay with him. We lay there that night, talking across the dark space between our bunks, remembering funny incidents from Germany, talking about what we had encountered in Vietnam.

“The first thing you have to do is to learn not to be afraid you’re going to be killed every time you go out,” Dan said. “You need to stop worrying about your mortality and think only about the momentary reality.”

But we wondered what it would be like to be killed. Are you aware beyond death? Where does your soul go?

“Ha! You better believe, I won’t be staying here,” Dan said with a chuckle.

The next day we went down to the airfield together. I was going to fly back to Phu Loi, and Dan was going to deliver a generator to a Special Forces “A-Team” unit near Binh Khat. We exchanged some off-color remark by way of goodbye, and went our separate way.

When I landed at Phu Loi, the line-chief, who had served with Dan and me in Germany, came over to tie down the aircraft. “Chief, did you hear about Mr. Lambdin?”

“What do you mean, hear about him? I just left him. Hear what?”

“He was just shot down and killed near Binh Khat. He was delivering a generator.” 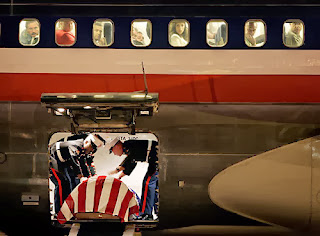 “No,” I said. “That’s not possible!” I spoke those words while standing at the wall, but they reached back across the almost forty years that separated then from now in an instant. 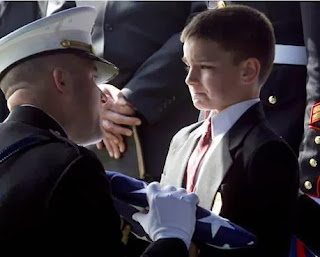 Then, with my throat choked, and my eyes dimmed by tears, I continued my sojourn down the wall, putting my hands on 22 more names, feeling each of them, seeing them as the young, vibrant men I remembered. Looking around I saw that I wasn’t the only one traveling through time and that day. To me, my fellow time travelers were no longer old men with gray hair and drawn skin. They were young, and they were wearing jungle fatigues and flak vests, and they had M-16s slung over their shoulders, or .45 pistols strapped to their sides. Their eyes weren’t filled with tears…they were set in the ‘thousand yard stare’ that we all wore then. 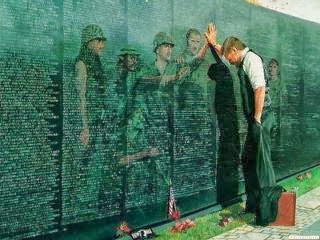 VIETNAM REFLECTIONS by LEE TETER
http://www.art.com/gallery/id--b19052/vietnam-veterans-memorials-posters.htm
I said one more goodbye to all my friends that day, then I walked away, leaving the wall behind me, but not the ghosts and memories. They will be with me until I cross that great divide. Vietnam was but three years out of my 76 years of life...but the impact those three years made on me is incalculable.

On this approaching Veterans Day I think not only of my Vietnam and Cold War peers, but of all 40 million who have served this country since its birth. We are one long line stretching through the battles that mark our history; Bunker Hill, New Orleans, Matamoros, Shiloh, Little Big Horn, San Juan Hill, The Marne, Iwo Jima, Chosin Reservoir, Ia Drang, Baghdad, and Fallujah, and I am proud to say that I am a brother to all of them.
Robert Vaughan - CW3 - US Army (ret) 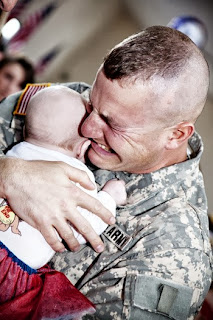 All of us gave some…some gave all.
SOLDIER SEES DAUGHTER FOR THE FIRST TIME