Vicky J. Rose grew up a small central Texas town listening to stories about gunfighters, outlaws, buried treasure, and Indians. So it made sense to write about them. And she did.

In the sixth grade, she wrote a play about Jesse and Frank James. The desire to write pushed her to complete a couple of novels in her twenties that, by her own admission, didn't find the light of day.

About a year after submitting them, an editor finally got around to looking at one of the stories.

"Obviously searching for something, anything, complimentary, to say about it, the editor said, 'It has a very nice title,' ” Vicky recalled. "I quit writing for a long time, thinking I needed to gather further experience and wisdom before trying again," she said.

Several  years later, she tried again. This time, the results were different.

She has written articles for Angelo State University’s Oasis and other publications as well as the anthologies of the Texas Folklore Society.

Her short story, "A Promise Broken, A Promise Kept," in La Frontera’s Broken Promises anthology, ranked as a 2014 Spur Finalist.

Lately, Vicky has turned her focus to writing novels.

1. You received an award last year for your short story—"A Promise Broken, A Promise Kept"—which ranked among the top three stories in Western Writers of America’s short fiction category. Tell us a little about that memorable author moment.

I could lie and say, “Oh, I was so thrilled; it was such a great honor,” etc., etc. But my first feelings were of disappointment because I didn’t win the Spur! I had a great belief in that story.

Later, I did begin to realize what a great honor it is be a Spur finalist, and I am thrilled.

2. You've written in the novel and short story formats. What different challenges to each present?


It’s hard not to be too verbose in a short story. Everything has to be leaner. Every sentence, every word, has to count toward the point the author is trying to make.

I took a class in screenwriting at Sam Houston State University, Dan Rather’s alma mater. The professor had us do an outline and all that stuff first.

Then he told us our script could only be ten pages long. You should have heard the whining and complaining that it couldn’t be done but it is possible to pare down a story to its basic idea.

When an author begins a novel, he or she is getting into a canoe and rowing down a river. The challenge is to stay on course, keep moving, and not be led down byways that go nowhere


3. What was the inspiration behind your novel, "Treasure Hunt in Tie Town"?


I had done some interviews around my hometown about local buried treasure legends for a paper I wanted to present to a history organization I belong to. It was turned down, and instead, the woman who was choosing the papers talked about her mother-in-law’s plate collection.

I tweaked it, submitted it to Lost Treasure magazine, and they jumped on it. Later, I thought it would make an interesting premise for a novel. Being shoved aside for somebody’s mother-in-law’s plate collection was the best thing that happened to that story.

On a broader note, when I sit down to write a novel, it helps me to ask myself, “Who am I writing this for?” 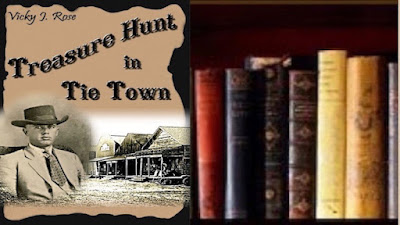 With Treasure Hunt, my goal was to simply write a really good Western. I don’t know how men feel about it. Women tell me they love it. But that’s the difference between men and women.

I used to cut hair for a living. Men will say, “Thanks,” and that’s about it. With women, they either love it, or they are crying because they don’t like what you’ve done. That’s the reason I cut mainly men’s hair; I couldn’t take the drama.

Another novel, tentatively titled Muskrat Hill, has been picked up by Kensington and will soon be published in their e-book and print-on-demand line.


4. You write both fiction and non-fiction. How does your background play into your storytelling?


I grew up in a small town steeped in the history of the Wild West. After the Civil War, it became a hotbed of violence. It was so bad, Print Olive and his family had to leave and move to Colorado.

I had ancestors with ties to both sides of the law. It took vigilante justice to put a stop to the bloodshed because the law was afraid to even go there.

We knew we were from a backward small town that other people in the county looked down upon even years later, but we also realized we were special because of it.


5. When did you first discover your love for writing? Any particular book or film or anything else inspire you?


I’m not sure about a book or film, but when I was in sixth grade that play I wrote about Jesse James earned me praise from my family and friends. Since I’d never been praised for anything else, I thought it might be something I could possibly be good at. All my life, I’ve been a sporadic writer.


6. How do you approach the storytelling process once you get an idea? Do you plot things out or create as you write?


I never was good at outlines, but since taking that screenwriting course, I’ve had good luck writing a screenplay about an idea first, and then turning it into a novel.

They don’t always resemble one another closely when I’m finished, but writing a screenplay helps me to visualize the story I’m trying to tell.


7. If you could meet one person from the Old West, who would it be and what one question would you ask?

And when she answered, I would hope that just a little bit of her courage would rub off on me.