The Legends of America website and the article "The American Tradition of Thanksgiving", compiled and edited by Dave Alexander, 2017, offers a nice explanation of where the American Thanksgiving 'idea' began and how it evolved into the celebration as we know it today. I have condensed the information and put it into bulleted format. (https://www.legendsofamerica.com/ah-thanksgiving/)

Personally, Thanksgiving occurs in what I call my 'thankful season." September through February are the months during which I recharge my inner batteries. I reassess what lies behind me. I look to the future in anticipation of experiences and discoveries yet to come as I travel my life's journey.
During this time of year, the reclusive loner in me sheds her March through August "Get off my lawn!" growliness and embraces the joy and wonder of autumn colors, crisp morning air, cooler days becoming winter cold with the shorter nights, the sights and songs of Canadian Geese and Sandhill Cranes flying to wherever it is they'll spend the winter, smaller migrating birds stopping at my birdfeeder, foxes (and lamentably, skunks) coming in to help themselves to the food I keep out for feral cats, clear starry skies, and snow, prairie snow.

For me, the autumnal weeks of Halloween and Thanksgiving are heralds to the holiday spirit that arrives with the Christmas season. Then, winter sets in, and I'm at my physical and mental best during these darkest days of the year.

I think of this time of year as an extended thankful season, not just a day here and there for self-reflection and appreciation for what I have in my life. So, with that, I wish you all a Happy Thanksgiving, wherever you are and however you celebrate. 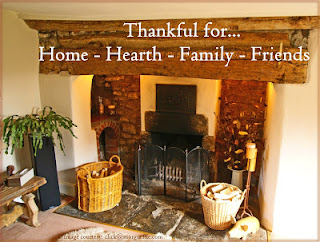 On a side note: I have experienced an ongoing struggle for several weeks with commenting and responding to comments on Blogger. If I am unable to respond to your comment, I will come back to this article and add comments in this area. Please check back, because I do read and respond to every comment, as I appreciate the time and interest you've taken to write a comment.

Kaye Spencer
writing through history one romance upon a time