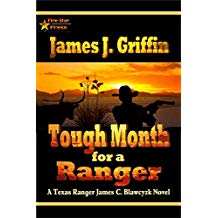 This month's topic will be a bit of an unabashed, and unapologetic, plug for my latest Texas RAnger James C. Blawcyzk novel, Tough Month for a Ranger, just released by Firestar Press, an imprint of Cheryl and Livia's Prairie Rose Publications.

This is my second contemporary Texas Ranger novel, following the adventures, trials, and tribulations of sixth generation Ranger James C. Blawcyzk, a direct descendant of the first James C. Blawcyzk, the main protagonist in my first Texas Ranger traditional western series. The current day Jim is every much an old-fashioned, no-nonsense Texas Ranger as his ancestors, but proficient in the modern methods and tools of crime fighting.

That brings me to the main topic. The difference between writing traditional versus contemporary Westerns.

I find it much more difficult to write contemporary Westerns. When you're working in the time period of the old West,  you can pretty much change around settings, places, names, and any other details to suit your plot, as long as your details aren't too far fetched, or the actions of your characters too outrageous. Most people won't notice the differences in such details, except for the purists. I try to keep things as accurate as I can, but, like any fiction writer, will make changes to fit the story.

It's not that simple with a contemporary novel. You'd better get the details right, including landmarks, highways, city streets, businesses, and methods correct, or someone will be certain to point out yo u have your character, say, driving the wrong way down a one way street in Austin.Many of the locations in my novels I have visited personally, so I have photographs I've taken for reference. I used to, and sometimes still do, rely on a good old fashioned Rand McNally road atlas .However, I've found Google Maps to be an invaluable resource. You can get details of your settings from Street View, and a good idea of the geography for the satellite images.

Some other examples. Frontier Texas Rangers didn't have a dress code. Present day Rangers do. Different departments use different vehicles and weapons. And obviously, there are many more restrictions  on the olice today.

Despite the extra effort it takes, I love writing for both eras. Give it a try.

Until next year, Merry Christmas and Happy New Year!