The western comic book continues its ride... they are not as plentiful as they were in the 1930s-1970s (when they were ubiquitous), but they seem  more common now than they were a couple of decades ago. This is due, in part, to the existence of smaller, independent comics publishers (and a growing amount of online content).

TKO is one such publisher. Their recent western entry was a six-part miniseries (collected last year in a single graphic novel volume) called The Seven Deadly Sins. It is written by Tze Chun, who is best known for his television work (including as writer for the show Gotham). The illustrator is Russian comics artist Artyom Trakhanov. The plot is sort of a mashup of The Magnificent Seven and The Dirty Dozen, as directed by Quintin Tarantino. 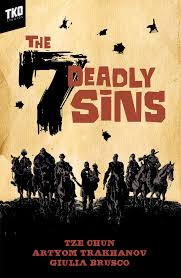 The book is set in Texas in 1867. A kind priest, Father Antonio, rescues six killers from a stagecoach that is taking them to their just reward (to wit, hanging in San Antonio). The priest describes each as a "deadly sin," with himself providing the seventh -sloth. He had been peripherally involved in a great injustice ten years earlier, you see, and had only now summoned the courage to try to set it right. 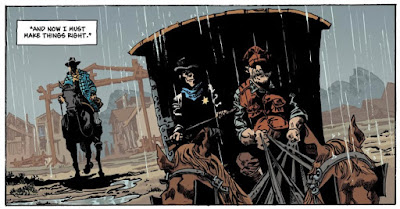 Antonio is the subordinate of Father Threadgill, who is head of the mission. Father Threadgill has a maniacal hatred of Indians, but wants to save the souls of their children... save them from their very Indianness. In 1857, after taking Antonio in when his own mission had failed, Threadgill took his new assistant along on a secret mission. He had hired a company of corrupt Texas Rangers to attack a Comanche village while the men were away hunting, kill all the adults, and capture their children. The kids were to be taken back to the mission, identified as Mexican, and give away for adoption (well, not exactly given away.) It was not the first time.

One infant was deemed too small to make the trip back, so the Rangers were going to kill her. Antonio begged for the child's life and took responsibility for her. He named her Grace, and from then on he was her surrogate father, Her real father, though, was the fierce war chief Black Cloud. His fury at his child's abduction caused him to step up his band's war on whites along the border tenfold, and for years he wreaked his vengeance by slaughtering settlers and stealing their children.

Finally, Father Antonio's conscience could take no more. He stole a large amount of money from the mission -money "earned" by selling Indian children -and freed the six outlaws, offering them a hefty payday if they would help him accomplish his mission.

Taking Grace deep into Comanche country in search of the dreaded Black Cloud -to give her back. Pursued along the way, of course, by Father Threadgill and his corrupt Rangers. 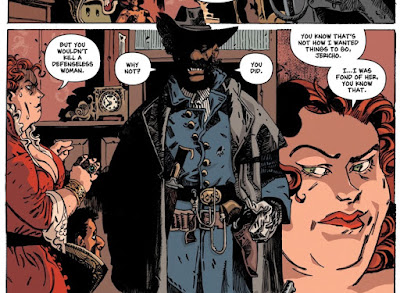 JERICHO  MARSH (wrath). Clearly modeled on Samuel L. Jackson's character in The Hateful Eight, Marsh had led a group of black Union guerrillas during the Civil War and was wanted for war crimes. When the war ended, his two daughters were forced to sign labor contracts- their contracts were sold and they were taken away. This is a pretty rare pop culture reference to the very real historical situation for ex-slaves in the years immediately after the Civil War, when state legislated "Black Codes" were passed that kept them enslaved every way but in name.

Jericho Marsh will do anything, and kill anyone, to find his daughters. 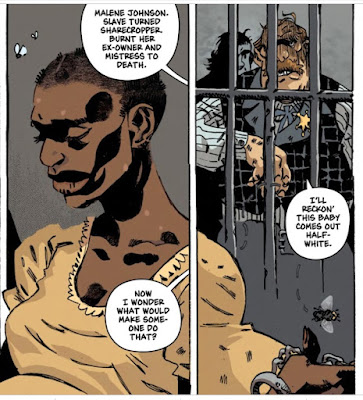 MALENE JOHNSON (envy). A pregnant ex-slave. The father was her former master, with whom she was in love and who had promised to marry her -but who betrothed himself to a proper white lady instead, whereupon his whole family perished in a house fire. Malene was convicted of arson and murder. 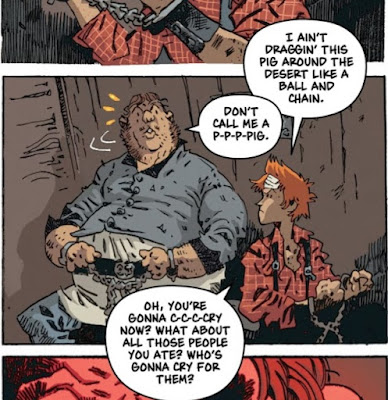 HOGG SMYTHE (gluttony). An overweight and simple-minded Confederate veteran who, when besieged by Yankees, killed and ate ten of his comrades.

IRISH CLAIRE (greed). A foul-mouthed, hot-tempered young Irish woman who is a notorious bank robber -described by others as a "tomboy" and a Lesbian (or more accurately, a Trans person who identifies as male, and wants to be called Clarke.) 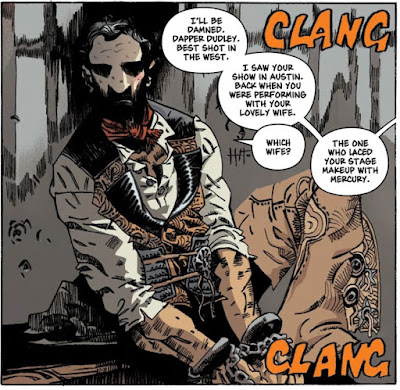 DAPPER DUDLEY (lust). A crack shot, formerly a pistoleer in Wild West shows... also a vain con man and a consummate showman. His face is scarred because his former wife mixed mercury in with his stage makeup to get revenge for his raping her ten-year-old sister. 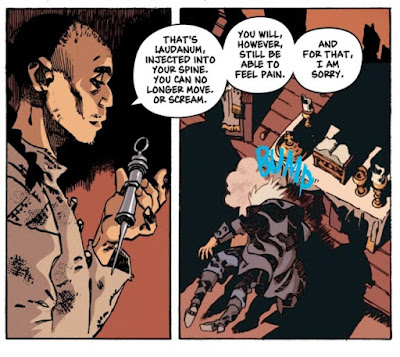 CHANG (pride). A brilliant surgeon in China and San Francisco who was forced into indenture and made to work on the railroad. He killed in order to make his escape.

The above description may seem like I am telling you a lot... but it is really just setting the scene for the story. Needless to say, there are a lot of shootouts, double crosses, and occasional acts of redemption (sort of).

It may not be for everyone. If you think Tarantino's westerns are too violent and profane, you won't like this. I certainly enjoyed it, though- it was fresh take on some very time-honored themes, and felt a lot like a spaghetti western.