What's the Score? Seven Men From Now by Henry Vars and By Dunham 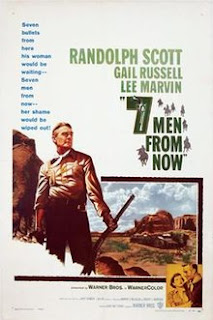 So far in my series of film score reviews for Western Fictioneers, I haven’t strayed too far away from the familiar herd of celebrated LPs that populated record store stables during the heyday of wild west cinema.

But there’s a lot of good music out there that —to the best of my knowledge—was never released on vinyl.

With the advent of inexpensive CD production, a variety of companies have gathered some of it together. Saunter over to the wild web, and you’ll find officially licensed ensembles riding herd beside bootleg outlaw tracks.

But today I’m concerned by that lost dogie of the plains. The rambunctious theme or haunting melody never gathered into the remuda and, like a stray yearling, wanders through the wilderness without a brand.

Consider the score for Seven Men From Now (1956). In The Films of Randolph Scott by Robert Nott, the author writes, “Henry Vars’ theme music is hauntingly beautiful and should be better known as a classic Western film soundtrack, and I agree.

Henry Vars (1902 - 1997) was a Polish immigrant. A friend of John Wayne, he composed dozens of film scores, including 50 in Poland and more than 60 in the United States. Known as the Irving Berlin of Poland, he wrote symphonies, theatrical revues, and a piano symphony.

Seven Men From Now stars Randolph Scott with Gail Russell, and Lee Marvin in what would be the first of his revered seven film Ranown series with director Budd Boetticher. Produced by John Wayne’s Batjack production company, it had access to any number of established composers. Elmer Bernstein, Dmitri Tiomkin, and Ray Webb scored films for Wayne. Vars too would score five of seven Batjac films in which Wayne didn’t appear. Seven Men From Now was the first.

Vars penned the title song with By Dunham (1910 - 2001), an American songwriter who also wrote the title song to Wayne’s McLintock. Together, Vars and Dunham would go on to write together and, in 1963, their most famous song was released — the theme to the movie Flipper.

When Seven Men From Now was released, Variety opined that “Henry Vars’ score goes with the story mood, as does the title he wrote with Dunham. Only a snatch of another song, ‘Good Love,’ is heard.”

Much of the soundtrack is constructed around “Good Love” and the “Seven Men” title music, and its unfortunate that it has never been released.

In this case, unlike some of the more famous scores, the best way to hear it is to take in a viewing of the entire film.