Birth  Control in the 19th Century

American women in the 19th Centuries averaged seven live births during their lifetimes. Prolapsed organs often occurred with this number of pregnancies, and this did not include a number of undocumented early terminations. Women’s diaries and letters reveal the considerable time women spent preparing for the pain and the realistic possibility of dying in childbirth. Pregnancy was truly a mixed blessing. Infection was another great scourge of childbirth. Women were very susceptible to infection during and immediately after the process of childbirth. Puerperal or childbed fever was both common and much-feared in the nineteenth century. For these reasons, as well as other concerns, 19th Century women looked for safe and ethical methods of birth control. Below is a list of birth control efforts and devices.

However, one should remember that not all women had access to these methods, contraptions, information, or a cooperative partner. Women on isolated homesteads and women in restrictive homes were at the mercy of their situations (as are some girls and women today).

People had been using forms of condoms for milenniums before the 1800s.  In the early part of the 19th century, condoms tended to be made from animal intestines and tied in place with a ribbon. However, in 1839, a man named Charles Goodyear made a huge development: vulcanized rubber. And that later spelled the mass production of rubber condoms, creating a more effective form of birth control that more people could afford. Plus, they helped protect against sexually transmitted infections (STIs).

However, in 1873, the Comstock laws started a ban on contraceptives, including condoms. This forced manufacturers to call them by a different name (unknown). Rubber condoms remained popular until the invention of latex in the 1920s 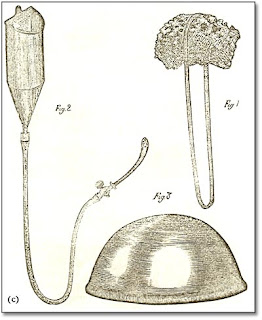 People inserted cup-shaped devices, like diaphragms and cervical caps, into the vagina to block sperm from entering the uterus. And, when used with a spermicide, they were probably the most effective birth control of the time, aside from abstinence.

Before Goodyear’s rubber invention, people tended to insert all kinds of objects — even half a lemon. However the safer and more comfortable rubber versions that inspired today’s devices weren’t as popular as condoms.

Withdrawal — the act of pulling out before ejaculation — was the most accessible form of birth control in the 1900s, since it didn’t cost a thing.  It could be highly effective if done correctly, and it was in fact effective for some people at that time. But it’s hard to do perfectly and, even now, there’s always a chance of getting semen inside the vagina.

The most effective contraceptive, if stuck to continuously, was abstinence. This simply means not having sex at all.

Abstinence was promoted quite a lot throughout the 1800s, and many married women did follow it. (Of course, some may not have had the freedom to choose this.)

However, lots of married men then turned to prostitution, causing “epidemics” of STIs.

Birth control was technically illegal for married people until 1965, and remained illegal for singles all the way until 1972. However, as is often the case with laws restricting sexual behavior, people found their own ways around it.

Women have been trying to block sperm from [entering the] cervix ever since they first suspected what sperm and women’s bodies created—pregnancy. Three main ways to prevent pregnancy involved block the sperm, kill the sperm, rinse the sperm away.

1. One popular method for blocking sperm involved sponges—like, actual sea sponges. Sears and Roebuck advertised a popular one as a regular old household sponge, but it was called a “ladies fine cup shaped sponge with netting," and had a string for easy removal. Other common blocking devices were pessaries, which doctors insert into the vagina to support bladders and other prolapsing organs.

2. & 3. To kill sperm or wash it out of the body, women commonly turned to suppositories and douches, which were also marketed as hygiene products. Lysol sold a douche that promised to wash out germs and other foreign substances, and marketed its disinfectant for use in the vagina with an ad that read, "Lysol has amazing, proved power to kill germ-life on contact." Women would also douche with vinegar, ammonia, and paprika. For their part, Sears sold “Ladies Antiseptic Suppositories."

These birth control methods (if you can even call them that) were—as you might guess—not exactly effective or safe, and hundreds died of Lysol exposure during the Victorian era. We're still a long way away from effective, cheap, side-effect-free contraceptives for everyone (get on that male birth control, scientists).