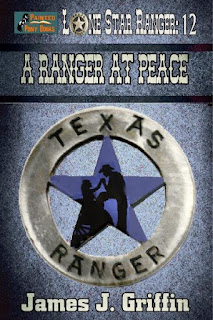 I realize I'm a day late, but there's two reasons. First, I've been a bit under the weather. Second, today was release day for the 12th volume in my LONE STAR RANGER series, A RANGER AT PEACE.

Nate Stewart is now 21 years old, a Lieutenant commanding a small company of Rangers. Trouble a-plenty awaits them in Tascosa, the most dangerous town in the Texas Panhandle.

However, Nate's got a bigger concern. Does he want to remain a Ranger, or get married, settle down, and have a family? Sonya Martinez knows what she'd like. But Nate just isn't certain. Besides, the outlaws of the Panhandle have other plans for Nate... like seeing him dead.

Here's a trivia question for all of you. Two of the characters in the book are named Colby Sawyer and Avery Fisher Hall, Who can tell me where those names come from?

Pick up your copy from Amazon today!

Until next month, when hopefully the weather will be cooler.