Unproven or fraudulent medical practices, often through the sale or application of "quack medicines." The word "quack" derives from the archaic Dutch word "quacksalver," meaning "boaster who applies a salve."

In Lydia Kang MD and Nate Pederson’s book, Quackery: A Brief History of the Worst Ways to Cure Everything, The authors want to remind us that not all perverse efforts to survive were done by charlatans. Some of these people actually believed that their product/method/practice could cure patients.  From Ottomans eating clay to keep the plague away, to Victorian men soaking in a mercury steam room to cure syphilis, to Roman epileptics sipping gladiator blood, the road to health has been paved with misguided health providers and Quacks.

Before 1906 when the Pure Food and Drug Act was passed, entrepreneurs could make any claim they wanted about their specialized products that ranged from medicines to herb tonics, weight losing pills, to hair restorers. Sadly these remedies usually didn’t work, and often they caused more harm than good. (Saturday Evening Post).

Many of these elixirs, remedies, and restoratives were heavily laced with lead, alcohol, codeine, mercury, or opium. Ads and labels boasted “satisfaction guaranteed.” One weight control method was particularly guaranteed—the pill that contained a live tape worm. This miracle drug was advertised in the Saturday Evening Post on July 6, 1878. 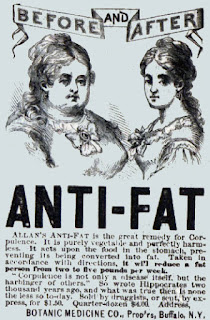 Tuberculosis was of course a dreaded disease.  Once diagnosed, it was only a matter of time for an imminent death. In 1873, however, one brilliant doctor miraculously “cured his only child with medical marijuana.” It must have been a miracle since no person with tuberculosis has been cured by marijuana sinc 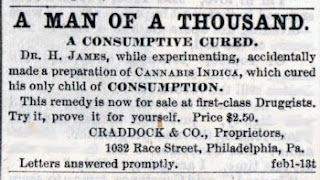 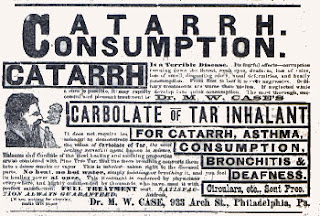 In The Country Gentleman on September 11, 1879, Florida Water was a cologne using orange scent. In the ad a fountain appears alluding to the Fountain of Youth which Ponce de Leon sought in Florida. Interestingly, Florida Water is still around, though it makes no claims to youth or health.

Another product sold by quacks appeared in 1881. Here, one could buy a Wonderful Magneto-Galvanic Battery that claimed to revitalize and strengthen organs—without actually specifying which ones. The company recommended it for 56 different ailments, including meningitis, diabetes, heartburn, and “hysteria or fits.”  Here is a Voltaic Belt with amazing results. 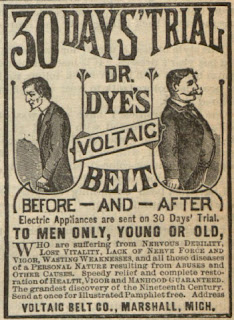 Snake Oil  A substance with no medicinal value sold as a remedy for all ailments.

Although the common name for a bogus medicine is “snake oil,” the stuff we’ve all seen in the Westerns, originally snake oil was a valid medicine brought to America by Chinese laborers.  This oil was made from the “oil of the Chinese water snake, which is rich in the omega-3 acids that help reduce inflammation, snake oil in its original form was effective, especially when used to treat arthritis and bursitis” (Google).

Many well-intentioned practitioners tried to copy this practice in America, but alas, none of our snakes had the same level of omega-3 oil, most had only a fraction of it, so the oil was nonfunctioning.

However, that never hampered the best of the quacks that sold elixirs, potions, and other “medicines.” From Ann Anderson’s book, Snake Oil, Hustlers, and Hambones: The American Medical Show, comes a history of medicine shows and the hustlers who appeared in them. Anderson describes the “come-on” the shyster entrepreneur might have used:

How much is your health worth, Ladies and Gentlemen? It’s

priceless, isn’t it? Well, Ladies and Gentlemen, one half dollar is all it

takes to put you back in the pink. That’s right, Ladies and Gentlemen,

for fifty pennies! Nature’s True Remedy will succeed where doctors These bottles may have contained benign ingredients as innocent as licorice and Echinacea, but more often they contained ingredients as deadly as camomel (never to be taken orally) arsenic, mercury, codeine, morphine, etc. These were the wares of the mountebanks who travelled from town to town. If the malady was pain, alcohol or limited laudanum worked, but these bottles of snake oil contained other ingredients that often led to worse problems.

Why even balWhy even baldness could be cured with Nature’s True Remedies. Unfortunately, these cures never came about, and rarely did these "snake oil" sellers travel the same route again.

So much to write, why I can write a book about these topics—as so many have.  I hope I’ve opened a door to an incredible history—older than most countries.    Stay Well!!!