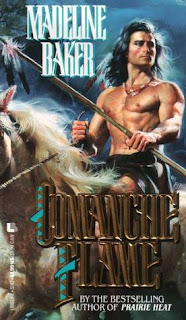 .1. What was your first Western novel or story and was it published?

2. What Western writer or writers of the past were the biggest influence on your work? 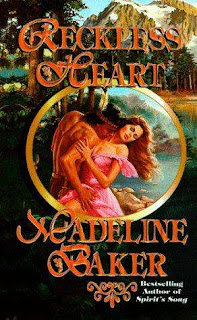 I read a lot of western fiction when I was growing up....I don't recall any one of them being more influential than the others.

3. Is there a particular scene from a Western novel that was so powerful when you read it that it stuck with you? Perhaps has become a scene you've tried to live up to/equal in your own writing?

Being a woman and a romantic, I'd have to say the scene in Hondo when John Wayne takes Geraldine Page in his arms and kisses her.

4. What's the first Western you remember reading from cover to cover?

Shane. I still have that old paperback book. I was so disappointed in the movie. Alan Ladd was the worst actor for the role. He was too short, too blond, and looked nothing like the dangerous man-in-black on the cover of the book. That's one movie I wish they'd remake! Although I'm not sure anyone could replace Jack Palance.

5. Who is your favorite historical Western figure, and why?

Crazy Horse. His story fascinates me.

6. How much historical research do you do, and how do you go about it?

As much as needed. I used to go to the library. Then I started buying books. Now I do a lot of it online.

I think it's very important. You can't really tell the story without the proper background and setting, whether you're writing western or vampires.

8. How do you choose where to begin your story? Do you use prologues?

Hmm, good question. Usually the beginning just comes to me. The main one I remember is from a book titled Midnight Fire. The line, He was dying and he didn't care" came to me out of the blue. I wrote it down (because if you don't write them down immediately, you forget them!) and then sat down to find out why he was dying and why he didn't care. I use prologues from time to time, as needed.

9. Do you do all your research ahead of time, or as you go along?

I do it as I go along. Of course, sometimes I get so lost in it that my writing suffers.

10. Which of your characters do you identify with the most, and why? Was there a role model for this particular character?

I love all my heroes. The role model for most of them is Eddie Little Sky. Eddie used to dance at the Indian village in Disneyland many moons ago. As a young girl, I was intrigued by him.

11. Do you outline and plot your story or do you write as the inspiration or MUSE leads?

12. Are you a conservative in your writing and stick with traditional ideas for your characters and plots or do you like to go beyond the norm and toss in the unexpected and why?

My books are more romance than western, but I guess basically traditional. Except for my time travel books, which are really fun to write, whether I'm sending a modern man or woman back to the 1800s, or bringing them into the future. Most of my heroes are Indian or half-Indian because of the impression Eddie Little Sky made on me.

13. Do you need quiet when you write, listen to music, or have the TV on and family around?

Why my Muse is hot, I can write anywhere - at home, at the bowling alley, in a restaurant, in the car, on vacation.....

14. Have you experienced the "dreaded" writer's block and how did you deal with it?

When the words don't come, I go do something else. I can't think of a bigger waste of time than staring at a blank computer screen.

15. Who is your favorite fictional character that you have created?

You know that's like asking a mother to pick her favorite child, don't you?
I guess it would have to be Shadow, from my Reckless series. I liked him so much, I wrote 3 other books because I couldn't bear to say good bye :)  A close second is the hero from The Angel and the Outlaw, which is a time travel book. J. T. Cutter is an outlaw, and I've always had a thing for bad boys.

16. Who is your favorite fictional character that someone else created?

Hondo from the movie of the same name.

Except for the discrimination against Indians by whites in the old west, I tend to stay away from social issues.

18. Have you found that being able to self publish through Kindle and Nook, that you find yourself writing more of what you want rather than what the agent, editor, and publisher wants?

Not more. But I have written a few short stories that have gone straight to Kindle.

20. What are you writing right now?

Since I no longer have a publisher for new westerns, I'm writing vampires as Amanda Ashley. EC Blush is publishing many of my old out-of-print books. And Amazon will be publishing some others.

21. What do you plan to write in the future?

22. What made you decide to write Western fiction?

As far back as I can remember, I've loved cowboys, horses, and Indians. One night, when my husband was at work and my kids were asleep and I was bored, I started to write a book. I had no intention of even publishing it, or letting anyone else see it. I lived that book (Comanche Flame) day and night, and when I finished it I wrote another. And another.  It wasn't until a friend of mine read one of my manuscripts and persuaded me to look for a publisher. It took six years and 31 rejections, but I finally sold Reckless Heart. I've been writing, and loving it, ever since.
www.madelinebaker.net
www.amandaashley.net
Posted by Western Fictioneers at 1:00 AM