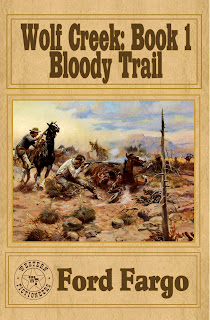 Western lovers, get out your comfy slippers and your lounging coat and ready yourself for an evening’s read that may take you into the night.

It takes its name from the creek that runs just south of town and on into the Arkansas River. It’s a real town. Not real in terms of being an actual town, but it’s real. And as you read, you’ll get to know and hate some dastardly characters, and know and love others who, though flawed, try their level best to do the right thing.

Meet the town doctor. Logan Munro. Veteran of three wars the British colonial empire fought in the mid-1800s, and friend of Florence Nightingale. When he appears, he appears bloody. But the blood on his chest is not the blood from which this novel gets its name—Bloody Trail.

Meet Ma’s Café, the place where a man can get a man-sized breakfast. And Kloepfer’s butcher shop, which offers prime cuts in season, buffalo included.

Meet Sam Gardner, former cavalry officer and marshal of Wolf Creek, and Fred Garvey, a no-nonsense deputy who sticks to the letter of the law.

Meet Liu Chiao and Li Wong, owners of an opium parlor and a laundry, respectively.

There are many more to meet, and you will become more and more familiar with them as you continue reading Wolf Creek books.

Now meet Jim Danby, a former Quantrill raider who defines his own finest moment as the raid on Lawrence, Kansas. He and his riders sit outside Wolf Creek, waiting for the signal to begin their raid. And if you think Lawrence was bloody, just wait.

Danby’s raid is carefully planned. Explosions and fire cut the town in two. Groups of armed riders charge through the town, shooting every horse they see and firing at Wolf Creek citizens at will.

The raid lasts minutes. The trail of dead and dying left behind gives more meaning to the word “bloody.” The schoolmistress is dead. One of her tiny charges is dead. A deputy lies in his own gore. Wagons burn. Businesses and shops are pillaged. And the Wolf Creek Savings and Loan loses two tellers and two saddlebags full of greenbacks.

But frontier towns like Wolf Creek are not populated by namby-pambys. The raiders rode away with fewer men than they came in with and some wounded as well. Nor are the hardy folk of Wolf Creek willing to let them off scot free. In minutes, Sheriff Satterlee’s got a posse together and they ride.

Fourteen men ride . . . straight into an ambush. But Wolf Creek’s riders give better than they take, and while they lose men, the ambushers become the hunted.

The posse rides on. And on. Secrets come out. Deeper friendships are made. True characters of men finally appear. And Danby’s raiders meet a bloody end in the Indian Nations.

This is an adventure written by several Western Fictioneers authors, the best the genre’s got, dead or alive. This is a short novel. Know why? It only introduces Wolf Creek and its citizens. Yes, it reaches a satisfying conclusion. But you end up sitting on the edge of your chair reaching for the next volume. While a handful of authors wrote this book, the story fits together well. While there are differences in style, they fit together well. And while Bloody Trail is a fitting beginning to a new series, it also promises many more rousing stories to come.

NB
While one of my characters, Billy Below, has a walk-on part in this book, I personally did none of the writing. As the stories develop, I’m sure you’ll see this happen a lot, as the citizens of Wolf Creek will become familiar to us all, and we will be able to call on them in supporting roles to our own characters.

Kudos to Troy and his team of writers for Bloody Trail. Well done.