Just as the modern holiday of Thanksgiving was begun during the Civil War, so too was the tradition of Santa Claus begun during the same time period. Santa made his first public appearance in a Philadelphia department store in 1849.

The Christmas holiday has always generally been celebrated the same way. Caroling was done in public places and trees were cut down and taken into homes.  During the war, soldiers would set up trees in camp and decorate them with hard tack. (Because that's about all that stuff was useful for anyway.)

Harper's Weekly illustrator, Thomas Nast, did not create the idea of Santa Claus, but he popularized the image we have of Santa as a rather rotund man in a red suit with a flowing white beard in a series of drawings for the magazine. 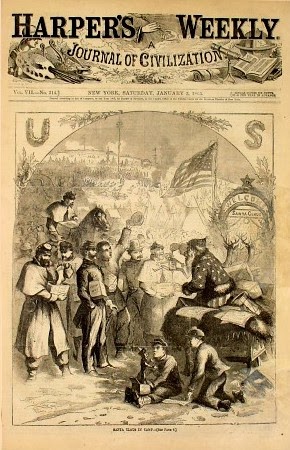 Nast was a staunch Union supporter and allied Santa with the Union army, often depicting him interacting with Union troops. Abraham Lincoln later said that the Santa who appeared in Harper's Weekly was "the best recruiting sergeant the North ever had."

Yet, the war did not stop for Christmas and it greatly affected how the holiday was celebrated. The Christmas of 1861 was described by Sallie Brock Putnam of Richmond, VA.

"Never before had so sad a Christmas dawned upon us. Our religious services were not remitted and the Christmas dinner was plenteous of old; but in nothing did it remind us of days gone by. We had neither the heart nor inclination to make the week merry with joyousness when such a sad calamity hovered over us."

After the War, Thomas Nast popularized the idea of Santa's home being the "North" Pole as a way to further tie the tradition to the Union.  So, in case you didn't know, Santa Claus is a Yankee.

Posted by Matthew Pizzolato at 12:21 AM