Whooping It Up: Monte

When a new town popped up in the Old West, recreation was among the first of the services offered. And that recreation typically involved the "Three W's" -- whiskey, whoring and wagering. We've already dealt with the first two subjects, so let's talk about some of the many ways a cowboy could be parted from his money in a gambling hall.

This is a Spanish card game (and the national card game of Mexico) that came to the U.S. with the troops following the Mexican-American War. The game was originally played with Spanish playing cards, and later with special Monte cards or with modified standard decks of cards. It remained an extremely popular card game, even among the Native American tribes, throughout the 19th Century. 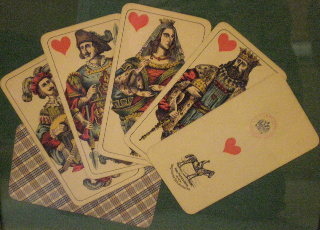 The players, sometimes known as punters, place bets on the layout of their choice (or on both), starting with the player to the banker’s right and continuing counter-clockwise around the table. Once all bets have been placed, the banker turns the monte face-up to show the top card, called the gate. If either of the two layouts match the suit of the gate, that layout wins. The banker takes the money from any losing layouts. 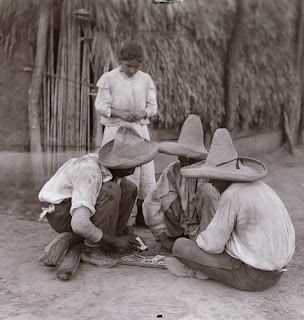 At the end of the hand, called the coup, the banker collects all losing bets and pays the winners one to one odds. He takes both layout cards and places them aside to form a discard pile, and turns the monte stack face down again, drawing the gate from the bottom and placing it onto the discard pile. The deck is not shuffled before the next coup.

The bank and deal remain with one player for five coups (six hands), or any lower amount agreed upon by the players. The deck is then reshuffled and passed to the player on the banker’s left, who becomes the new banker. At least ten cards must be left unplayed to prevent the players from guessing the remaining card suits. In some versions, the banker or dealer must have all of his money in plain sight on the table. If at any time the bank is emptied, the deck is reshuffled and play passes to the next banker. 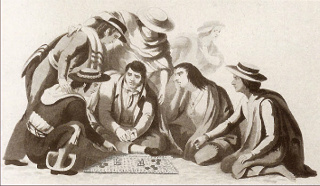 Spanish monte, or four-card monte, is almost identical to the Mexican version, but the banker takes two bottom cards and two top cards to make four total layouts instead of two. This decreases the house odds somewhat, as there are often two layout cards of the same suit. Players may bet on either or both of the layout cards by placing their bet between the two instead of on top of one card. Players win any bets placed on cards matching the suit of the gate, even if there are several layout cards with matching suits.


Wikipedia: Monte Bank
Posted by JES Hays at 4:00 AM