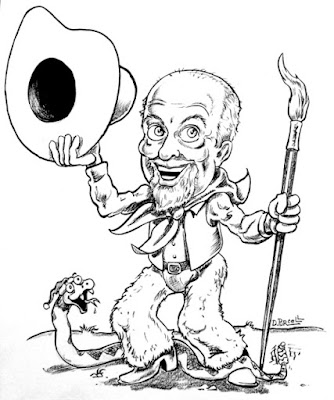 I’ve had a few folks who read my 1930s B-western book series ask me to name the best actors from the old cowboy films. To me, favorite movie cowboys and best western-film actors are two separate categories.

One key element that all western films have in common is the battle between good guys and bad guys. And, in the classic B-westerns of 1920s into the ’50s, the good guys wore white hats (except for Lash LaRue and Hoppy) and the bad guys wore black hats.

Film villains in those days were usually saloon owners, bankers and attorneys with pencil-thin mustaches and smarmy smiles. It didn’t take an A-student to identify a B-western bad guy within the first five minutes of a Saturday matinee presentation. (I only wish it were that easy in real life prior to an election.)

The great character actors who wore black hats and perpetrated dastardly deeds in many western films were usually the best actors. People like Charlie King, Myron Healey, I. Stanford Jolley and Barton MacLane appeared in countless films as delightfully wicked scoundrels. Where the white-hatted heroes were strong, handsome and, usually, quite stoic, the villains were able to mug for the camera and chew scenery while carrying out their evil attempts to steal the ranch, rustle the cattle, rob the bank or force the schoolmarm into an unwanted marriage. 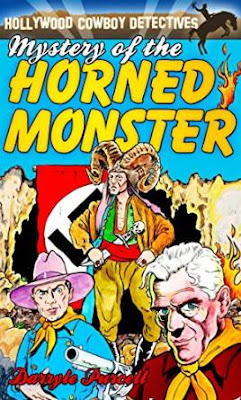 The King of the Black Hats was Charlie King. His bushy black mustache and deep Texas accent made him a popular rascal in close to 400 motion pictures during his career. Although he appeared primarily as a villain, King also played a variety of parts in oaters, including comedic roles. Virtually every B-western hero (Ken Maynard, Hoot Gibson, Tex Ritter, Bob Steele, Lash LaRue, Buster Crabbe, etc.) engaged in memorable on-film fistfights with King.

Myron Healey’s bad-guy characters were usually clean-shaven. But young audiences began to recognize his villainous smile as a sure sign he was up to no good.

Healey landed his first scoundrel roles post-war at Monogram Pictures where he faced off with Johnny Mack Brown, Whip Wilson and Jimmy Wakely, and also wrote screenplays for some of the films. That led to a long career in television and motion pictures.

Barton MacLane was another great character actor who became known for his cowboy villains. During his career, which lasted from the ’30s into the ’60s, MacLane also successfully portrayed gangsters, cops, military officers, newspaper editors and protective fathers. His recognizable face can be found in B- and A-feature films as well as television. He worked with Humphrey Bogart, Randolph Scott, the Marx Brothers, Glenda Farrell and other greats in films with singing and non-singing cowboys, pirates, Dr. Jekyll, the Mummy and Jeanie from the I Dream of… series.

Although his name isn’t often recalled, I. Stanford Jolley, whose acting career lasted from the ’20s into the ’70s, is instantly recognizable as a western villain. He portrayed all kinds of characters in motion pictures and television, yet his look personified the mustached black-hatted blackguard who would shoot a preacher in the back for the coins on his plate. Young matinee audiences would begin hissing the minute he appeared onscreen and then break into a cheer at the end of the film when the white-hatted hero dispatched him to his un-heavenly reward.

Mr. Jolley’s family and friends have remembered him as one of the kindest men in the business. Now that’s a real actor.

The classic cowboy stars of the past could not have existed, let alone been so heroic, if it were not for the wonderfully evil black hats who were out to get them.

Former newspaper editor and political cartoonist Darryle Purcell writes and illustrates Buckskin Editions’ Hollywood Cowboy Detectives series. The B-western book series was inspired by the great Saturday matinee serials of the 1930s and is illustrated in the style of the pulp adventure publications of the same era. The latest paperback adventure is Mystery of the Horned Monster, which includes a bonus short story, Mystery of the Silent Demons. The series can be found in paperback and Kindle editions at: amazon.com/author/darrylepurcell