THE DECEIVERS by Tom Rizzo

Time proved the best ally of con men who roamed the wide open spaces of the Old West ready to spin their creative schemes on all gullible segments of society. 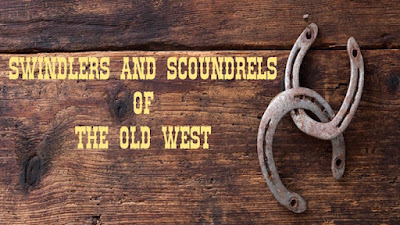 The families who headed for the frontier usually made the rough journey of four to six months with all their possessions plus an average of about $1,000 in cash—considered a sizable amount of the time since wage earners usually brought home only a few dollars a week.

Hucksters and swindlers awaited the unsuspecting like hungry vultures poised to swoop in for the kill. No one was immune: farmers, soldiers, merchants—anyone who had a buck or two or more for the taking.

Warnings or alerts about these tricksters traveled at a snail’s pace and usually never reached the frontier until pioneers and others fell victim to con men again and again. Con men were as prevalent as bars of soap throughout the American West.

Soap, incidentally, served as the core of one successful swindle. Although it’s impossible to identify all the con men who traveled the Old West, here are three who made a successful living fooling the unsuspecting. 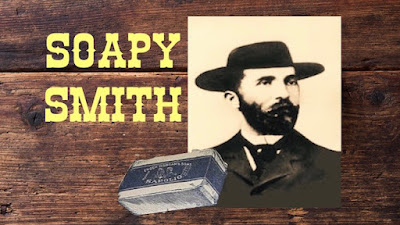 A crowd gathered on a busy street corner in Denver stood spellbound as the man in the dark suit and flat-brimmed hat balanced his valise on a tripod stand and opened it to reveal stacks of ordinary soap cakes wrapped in plain paper.

Jefferson Randolph Smith II took out his wallet and removed paper bills in denominations of one dollar to $100, wrapped them around several of the money-wrapped soap bars, and mixed them with the others. At that point, he offered to sell the soap for $1 to $5 a bar. A few individuals in the crowd—accomplices of Smith, known as the Soap Gang—quickly bought the soap packets.

After ripping away the wrapping, they excitedly displayed the $100 bills, bragging aloud voices they had pulled a fast one on the soap man and beaten him at his own game. Enticed by the success of these shills, others in the crowd anted up the cash to buy their packets—all which contained only soap, valued at about a nickel.

The scam gave birth to the con man’s nickname—Soapy Smith, who continued the hoax over a twenty-year period.

The “Prize Package Soap Sell Swindle,” as a Denver newspaper dubbed it, proved child’s play compared to the overall criminal pursuits of this American con man. Between 1879 and 1898, Smith played a significant role in the operation of organized crime in Denver, and in Creede, Colorado.

Smith’s last con, bilking a Klondike miner out of a sack of gold, cost him his life on July 8, 1898, in what’s known as the Shootout of Juneau Wharf. 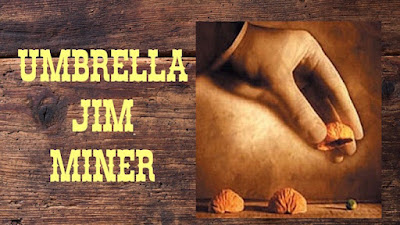 The crowd gathered around the man in the derby hat, and stylish clothes reacted with surprise when he flashed a big smile and snapped open his umbrella, even though he was indoors.

“Gather 'round, folks, for a chance to double your money,” announced Jim Miner, also called as Umbrella Jim, one of the slickest of Mississippi shell game artists, a master of the short-con. Miner operated under a simple strategy: Get in. And get out.

Not only did he start his infamous shell-and-pea game by opening his umbrella—rain or shine, indoors or out—he immediately segued into a ballad for his eager onlookers and then launched the con.

Miner smiled and placed a small round ball, the size of a pea, under one of three walnut shells and quickly shuffled them around the tabletop. “Who can guess where the little pea is hiding? Double your money,” he announced, reeling out just enough inducement to convince the daring to wager on the location of the pea.

In reality, the only big winner would be Jim Miner. The game had nothing to do with chance. While those who placed bets stood wide-eyed and focused on the back of Miner's hands, they couldn't spot the slight-of-hand wizardry he used to remove the pea between his thumb and second finger.

On occasion, he allowed someone to win, purely to squeeze higher bets out of the mark. And every crowd included someone who believed he was smarter than the game. No one playing had the ability to pick the right shell unless Miner—or another operator—wanted someone else to win. 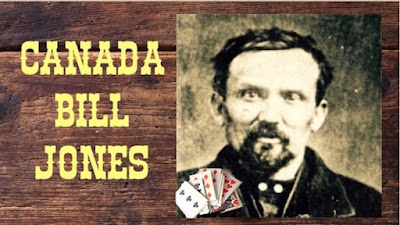 "Suckers have no business with money, anyhow," said Canada Bill Jones, one of the most capable card sharps in history.

Born in Yorkshire, England, in the early 1800s, Jones immigrated to Canada when he was about twenty and mastered three-card monte, which is not a game but a scam or swindle.
After several years of fleecing suckers in Canada, he crossed the border into the United States and took his game to the pre-war south where he conned passengers on Mississippi riverboats out of enormous sums of money.

Jones attributed much of his success to playing the rube.
He spoke in a squeaky voice, draped baggy clothes over his 130-pound frame, and came across as a bumbling greenhorn, a klutz that few people took seriously. But, that's where they made their mistake. Jones was anything but klutzy. He was a master of the con, and a renowned poker cheat.

After the Civil War, he and his card-sharp partner, George Devol, decided to ply their trade on the railroad, targeting passengers who were heading West at the beginning of the country's ambitious expansion.

The pair enjoyed so much success that Canada Bill wrote the general superintendent of the Union Pacific Railroad offering to pay between $10,000 and $25,000 a year for the exclusive right to operate a three-card monte on the trains. Bill promised to fleece only “the wealthy, and Methodist ministers.” Not surprisingly, the railroad declined to accept the offer.

Among his most ardent admirers were other gamblers. When Canada Bill died in 1880 in Reading, Pennsylvania, he was penniless. Dozens of his peers showed up at his funeral and raised money to repay the city for the cost of burying Bill, and to erect a gravestone in his honor.

One card sharp at the funeral wagered $100 that “Bill is not in that box.” 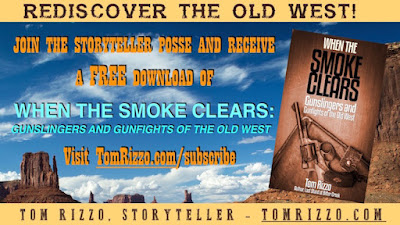 Tom Rizzo invites you to “Discover the Historical West” and read about characters and events that shaped the American frontier. Join the StoryTeller Posse and receive occasional dispatches from the High Plains and beyond and receive a FREE copy of "WHEN THE SMOKE CLEARS: GUNSLINGERS AND GUNFIGHTS OF THE OLD WEST. "
_______
Posted by thomasrizzo at 1:30 AM