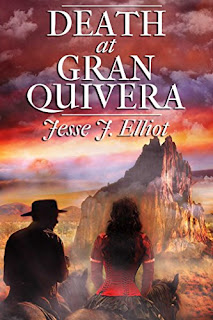 
I Dorothy A. Bell received a copy of the novel Death at Gran Quivira by author Jesse J. Elliot in exchange for an honest review. I give Gran Quivira four stars.

The grizzly find of a bloodied scalp of a golden haired girl on a New Mexico property owned by a young woman Iragene Jones, and her brother Daniel sets into motion this tale of one families hard scrabble to eke out an existence in New Mexico in the 1800’s.

After the civil war the railroad moguls had dreams of commerce and riches with rails stretching from coast to coast. Their dreams embolden ruthless desperados to threaten, rape and destroy on their quest to acquire the land upon which the rails were to be laid and rake in the money. The home of the Jones: Iragene, her brother Daniel, his pregnant wife Prudence and their friend Cassie, and many of their neighbors, stood directly in harm’s way. Neighbors were important in this hostile land. One could take refuge and count on a neighbors support in times of trouble. The law was often miles away and had other concerns.

In every western there has to be a great shoot out and Death at Gran Quivira does not disappoint.

The author has peppered in interesting historical points without disrupting the flow of the story. I lost track of all the neighbors and their points of view. But the plot was well thought out. And characters well defined, each with their own agenda. The grizzly scenes, just grizzly enough, the love scenes lovely. 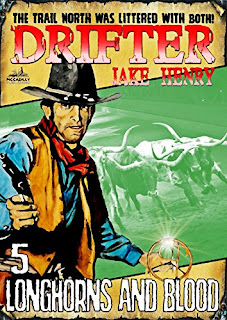 Longhorns and Blood (A Drifter Western) by Jake Henry

Longhorns and Blood is number five in a series of books written by Jake Henry. His books can be read in isolation or in order. The main character, Jeff Savage aka the Drifter, is a Texan who served in the Union Army and still wears his blue, uniform pants in spite of the war being over. He’s good with a gun, good with the horses, and good with the woman—at least most of the women.

Savage became the Drifter after four years of bloody fighting in the War only to come home to discover his wife had been raped and murdered by a gang of cutthroat, renegade Confederates.  After avenging his wife’s horrific death in Book 1, he chooses a life of drifting—but always on the side of the law and righteousness. In Longhorns and Blood, Savage is confronted with a series of murders and the stubbornness of a dead cattleman’s daughter, Mavis. In a never-ending series of murder and mayhem, Savage attempts to save Mavis and her cattle from her bad decisions and the ruthless Breen.

The book is a succession of shoot-em-ups, cattle stampedes, and just plain bloody mayhem, and the reader hardly has time to relax until another string of events occur.  Desperate to protect Mavis from inevitable death, Savage is forced to go to the Long Trail Saloon “where they’re all bad, to the man” to recruit cowhands to help the hapless Mavis, and the rest is left to the reader.

As I read Longhorns and Blood, I pictured Savage as a Clint Eastwood type. As exciting as a spaghetti Western, Henry pulls no punches and throws in every element of violence known to the old west. His succession of action is well laid out, and the novel maintains its momentum. The characters are almost believable, and the many bullets that Savage takes per book is limitless.  As a female author, I get tired of the mindless whores and illogical women, but it’s only been recent that anyone has recognized the fact that women played a major role in the old west.  Lastly, I found his characters who were supposed to be “bad to the man” some of the most likeable in the story. See for yourselves.

For a great foray into the Old West and a bit of escape, take some time and read the entire series of “the Drifter,” and enjoy the wild ride. 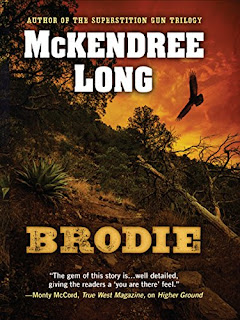 
Anyone can be a writer—all it takes is a working knowledge of a word processor or the archaic process of applying pencil lead to a lined, yellow page. However, to be a good writer, one must own the technique of creating credible dialogue, vivid descriptions, character development, plus a captivating and persuasive plot.

As if he had not previously established these skills in earlier novels, McKendree Long cements his writing talent with his recent novel, Brodie.

After the murder of Cross-Eyed Lil, the friendliest working woman in Sweetwater, former Ranger Brodie Dent is deputized by Town Marshal Curly Jack Sentell. Accompanied by Lil’s orphaned teenaged son, Cracked-Head Billy, the two men set out to kill the men responsible for the woman’s death.

The leader of the band of murders is Preacher Vance, whose current occupation is abducting women to sell to Apaches and renegades on the Texas-Mexico border. Preacher, tricky as a coyote and elusive as a jackrabbit, leads Brodie and Marshall Sentell on a chase across the Llano Estacado.

Mr. Long is an aficionado of late 1800s firearms and helps the reader understand the importance of cowboy weaponry. He knows his stuff—from the nitty-gritty of a gunfight to the raw emotions of the lawmen who often served as jury and executioner.

This is an entertaining read with just the proper mix of humor and adventure. 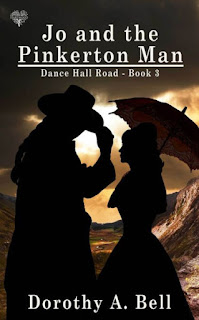 Jo and the Pinkerton Man by Dorothy Bell

If you like a good adventure/romance yarn, try this book. Schoolmarm Jo Buxton is headed for her new job at an all-girl school when she meets Pinkerton agent Ryder McAdam. Ryder informs her that the owners of her school are suspected criminals, responsible for the attempted abduction of several students -- and the disappearance of a former teacher. Jo agrees to help Ryder discover what's going on at the school, and over the course of the job, falls in love with him and he with her.

This is a good read, with action and tension throughout the book. Ryder is an interesting character and Jo is a strong heroine. The suspense climaxes when they learn that Jo herself is scheduled to be abducted, and Ryder is not certain how to protect her since she refuses to leave the school and her young charges behind. This is the third book in a series by the author, and I liked it best so far. The plot flows in a logical fashion, the bad guys are believable (and get what's coming to them in the end), and the action is exciting.

——J.E.S. Hays Author of Devon Day and the Sweetwater Kid: Down the Owlhoot Trail

Posted by Livia J Washburn at 9:13 AM