For those who might not make it to the Western Fictioneers Convention this September, I thought I would share a bit of information about two Colorado women doctors who had a medical practice prior to 1900, who just happened to have the same first and last names. Here are the brief stories of  the Doctors Mary Bates. 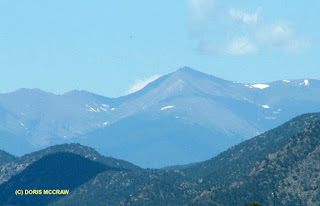 First, a bit of context for their stories. Colorado became a state in 1876, hence the name 'The Centennial State'. The theory about Colorado's lateness in mass settlement is that people did not believe you could cross over the many fourteen thousand foot peaks. Of course there were the mountain men in the early 1800s, but it took a gold rush in 1859 to prove that theory wrong. From that point on the state saw an influx of gold seekers, and businesses that provided goods and services to said prospectors.

Following the gold and silver seekers were the health seekers. Many found the clear, cold and thin air of Colorado to be beneficial to their health. With the health seekers came the physicians and others who offered their services to the ill. Into that mix came the women physicians who also wished to practice medicine. There were many women who took advantage of the opportunities afforded them in this new area. The first Dr. Bates arrived around 1878.

Dr. Mary Helen Barker Bates was born December 17, 1845 in Hannibel, Oswergo County, New York. She was the daughter of Dr. Ezra Barker and Jane Ruth Freeman. Mary graduated from the Women's Medical College in Philadelphia in 1873.  That same year she moved to Utah, where some sources say she began an Obstetrics School for women in Salt Lake City. The family site states she was 'Brigham Young's Family Physician'. While still in Utah she met and married attorney George Clinton Bates in 1876. By 1878 Mary and George moved to Leadville, Colorado. There the two practiced their vocations. In the 1879 Leadville City Directory, Dr. Bates is the only female physician listed along with the other thirty-four doctors.

Leadville sits at 10,152 feet above sea level in the Colorado Rockies. It is currently the highest incorporated town in North America. (The honor for highest town originally went to Altman, Colorado at 10,630 feet, but it is now a ghost town). During the 1870s and 80s it was a booming mining town. It was in Leadville that the Guggenheims, and Horace Tabor made a fortune in silver. Doc Holliday and possibly even members of the James gang were in Leadville for a time.

By 1881 Dr. Bates and husband moved to Denver, Colorado for George's health. It was also 1881 that Colorado started licensing physicians and Mary Helen was one of the early one. (Her license number was 271). It was in Denver Dr. Mary Helen Barker Bates made history as the first woman in Colorado to be appointed to the staff of the Women's and Children's Hospital in 1885. She also was a member of the Denver Board of Education, Vice-President of the Colorado Medical Society and Colorado's Delegate to the Pan-American Medical Congress. Dr. Mary Helen Barker Bates passed away on August 3, 1924 in Denver at the age of 78.

Dr. Mary Elizabeth Bates was born in February 25, 1861 in Manitowoc County, Wisconsin to William Wallace Bates, a ship builder, and Mary Cole Bates, a physician. She arrived in Denver in 1891. Prior to arriving in Colorado she was the first woman intern (1882-1883) at the Cook County Hospital in Chicago, Illinois. She achieved this position after a grueling exam in which she beat out a number of male candidates. After her internship she studied in Vienna from 1883-1884, which a number of physicians both male and female did. Upon her return to Chicago she was a professor of anatomy at the Woman’s Medical College in Chicago from 1884-1889. In Colorado she was involved in the Woman’s Suffrage movement and was part of the group that affected the passage of the 1893 referendum which gave Colorado women the right to vote. In 1909 Dr. Bates developed a bill “The (Bates) Colorado Law for the Examination and Care of Public School Children” which passed in June of 1909. Dr. Bates also championed a strict adherence to the liquor and gambling laws of the state.

Of her time as an intern at Cook County Hospital, Dr. Bates says of the nineteen months she worked as in intern, she worked in the morgue, took part in fourteen amputations. Of her time there she later said “the first six months were hell, the second six months were purgatory, the next six months were heaven; when it came time for me to leave, I wept bitter tears..."  Dr. Mary Elizabeth Bates passed away September 18, 1854 at the age of 93.

For those who think women had a hard time practicing medicine, they did, but in Colorado the hard times were probably not a tough as other areas of the country. The West was opening up and doctors were needed, regardless of there gender.

Of course I've included women doctors in my writing.