The Crash at Crush


Have you ever heard of the Crash at Crush? It started as a publicity stunt. Crash two locomotives together and sell tickets. They’d done it before to the accolades of  spectators. 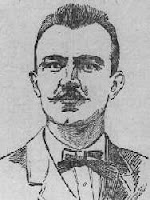 William G. Crush, agent for The Missouri-Kansas-Texas “Katy” (MKT) Railroad knew that the public was fascinated by train wrecks. They seem to be the California Police pursuits of the 19th century. People would travel from miles away just to get a look at the twisted metal and destruction, the victims scalded by the explosion of the engine’s boiler.


So, William pitched an idea to Katy Railroad officials: intentionally crash two trains in full view of spectators. It had been done successfully a few months earlier in , to the delight of spectators.


Needless to say, his superiors loved the idea.


The town of , , complete with a depot, was constructed just for the event. A special branch line of tracks was laid about 4 miles outside of the town of West. Wells were dug, water was run, food and drinks were available for purchase, and a huge tent was borrowed from Barnum & Bailey Circus to serve as a grandstand and protect the elite guests from the weather and the common spectators.
Rather than charge admission to the event, the railroad decided to make the event free—and charge $2 round-trip for a ride to site of the crash.


Everything was ready when dawn came on September 15, 1896. The train engines, #999 and #1001, were painted bright green and bright red, respectively. Both had been stripped down to ensure nothing went wrong. Six cars were attached to each engine to enhance the crash. 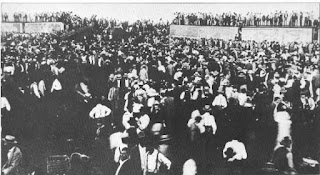 The organizers expected around 20,000 spectators to show up and planned accordingly. By the time the event started, more than twice that number jammed the small valley. Every inch of ground was jammed with people waiting to see two trains smash each other into scrap metal. A carnival atmosphere prevailed, complete with medicine shows, game booths, politicians and souvenir stands. The men, women and children were given until late afternoon to listen to speeches and spend their money.


At 5pm, the two trains nosed together as if shaking hands and posed for pictures. They then backed up the low hills to opposite ends of the four mile track, and at ten minutes after 5pm, as Mr. Crush sat on horseback and waved a white hat as a signal, the engineers opened the steam to the predetermined setting and put the trains into motion before jumping off.


I’ll let the reporter for The Dallas Morning News describe what happened:


"The rumble of the two trains, faint and far off at first, but growing nearer and more distinct with each fleeting second, was like the gathering force of a cyclone. Nearer and nearer they came, the whistles of each blowing repeatedly and the torpedoes which had been placed on the track exploding in almost a continuous round like the rattle of musketry. ... They rolled down at a frightful rate of speed to within a quarter of a mile of each other. Nearer and nearer as they approached the fatal meeting place the rumbling increased, the roaring grew louder ...


"Now they were within ten feet of each other, the bright red and green paint on the engines and the gaudy advertisements on the cars showing clear and distinct in the glaring sun.


"A crash, a sound of timbers rent and torn, and then a shower of splinters.


"There was just a swift instance of silence, and then as if controlled by a single impulse both boilers exploded simultaneously and the air was filled with flying missiles of iron and steel varying in size from a postage stamp to half of a driving wheel ... 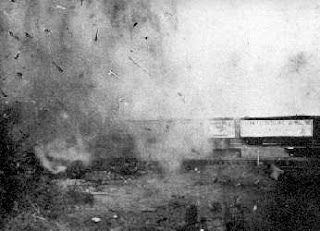 "All that remained of the two engines and twelve cars was a smoking mass of fractured metal and kindling wood, except one car on the rear of each train, which had been left untouched. The engines had both been completely telescoped, and contrary to experience in such cases, instead of rising in the air from the force of the blow, were just flattened out. There was nothing about the cars big enough to save except pieces of wood, which were eagerly seized upon and carried home as souvenirs."

The plan was for the trains to reach approximately 10mph by the time they met in the middle. Instead, they were traveling closer to 45mph. The impact sent shrapnel flying more than 100 feet into the air—and into the crowd. Miraculously, considering the size of the crowd, only three people were killed.

William Crush was fired the evening of the crash, but Katy Railroad officials rehired him the very next day, and he worked for the company until he retired.

The "Crash at Crush" was immortalized by famed ragtime composer Scott Joplin in his march, "The Great Crush Collision March." Click here to listen to the music  – complete with crash and scream:  http://www.perfessorbill.com/covers/crush.htm


It was a publicity stunt that will never be attempted again – but the stories remain, told over and over by those who were there for the Crash at Crush.


Tracy Garrett
WILD TEXAS HEARTS
UNDER A WESTERN SKY
Posted by TracyG at 8:45 AM