Marty Robbins has a birthday anniversary this month—his 93rd, in fact. But, sadly, Marty died on December 8, 1982. He’d suffered his third serious heart attack a few days prior, but he didn’t survive the surgery to repair the damage.

I was living in Cleveland, Ohio and running thoroughbred race horses at Thistledown Racetrack when I heard it on the radio. The DJ broke down and cried. I cried along with him.

A little about Marty

Martin David Robbins was born in Glendale, Arizona on September 26, 1925. When WWII broke out, Marty joined the Navy. While serving, he taught himself to play the guitar. When the war was over, Marty returned home and embarked upon a singing and performing career around Phoenix in nightclubs, on the radio, and on television.

During his early club-playing and performing days, “…he heard a country singer featured on the local radio station KPHO. [Marty] was convinced that he could do better. He drove right down to the station and earned a place on the show.”

By the end of the 1940s, Marty had his own radio program, “Chuck Wagon Time”, and a television show, “Western Caravan”. By the mid-1950s, he was invited to the Grand Ole Opry radio show and was a regular performer for many years. He signed with Columbia Records in 1951 with his first Number 1 song coming in 1956, which was Singing the Blues.

Marty was inducted into the Country Music Hall of Fame in 1982. His last song was a single that same year—Some Memories Just Won’t Die—a bittersweet irony. Over the span of his career, he recorded over 500 songs and 60 albums.

Discography information is HERE and HERE.

When he was growing up, Marty wanted to be a cowboy singer like Gene Autry, and he credits his grandfather, “Texas Bob Heckle”, a traveling medicine show salesman and story-teller, as the main inspiration for many of the songs he wrote later.

In an interview, Marty said, “…I’ve done what I wanted to do… I’m not a real good musician, but I can write [a song] pretty well. I experiment once in a while to see what I can do. I find out the best I can do is stay with ballads.”


When I was growing up and listening to Marty’s music, I wore out at least two 45 rpms of “El Paso” on Side A and “Strawberry Roan/160 Acres” on Side B. Marty’s gunfighter ballads influenced my love of the Old West. If I had to choose one artist’s music as the only music I could listen to, Marty Robbins would be that person. Yes, I love his music that much, and my musical tastes range from Vivaldi to Lin-Manuel Miranda’s ‘Hamilton’ and everything in between. 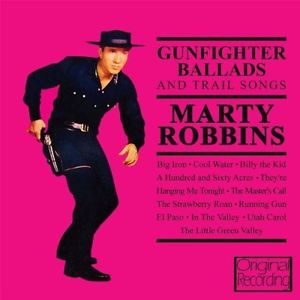 Marty was (still is) so influential to my writing that my historical western romance novel with Prairie Rose Publications, The Comanchero’s Bride, was inspired by his song, Meet Me Tonight in Laredo. This book is my little way of paying tribute to Marty and how much his gunfighter ballads mean to me. I sprinkled hints to many of his gunfighter songs throughout the story.

Below is an excerpt from The Comanchero’s Bride. For those of you familiar with Marty’s gunfighter ballads Running Gun and Big Iron, you’ll likely notice the small references.

At the livery, Mingo remained in the shadows where he could see both ways along the street. Opening the wagon doors just wide enough to allow him to pass through, he eased his way inside. Speaking in a low soothing tone to his horses, he packed and saddled them under the moonlight coming in from two windows. Opening half the double doors, he led the two riding horses out the back, tied them to a corral rail, and returned for the packhorse.

He no more than reached the packhorse when a cold voice in the shadows stopped him in his tracks.

Mingo froze. A few more steps and he would have been on the off side of the packhorse, but where he was, he had no protection.

“I’ve got a good bead right between your shoulders. I know about your fast draw and the price on your head. I’ve also heard stories about your throwing knives, so keep your hands where I can see them.”

“You know me. But who are you? What do you want?” Mingo didn’t care. He knew the challenge from the shadows was a bounty hunter. He needed the man to talk so he could pinpoint his location.

“I came out of El Paso. A man named Jack added to the price on your head—dead or alive—and some politician is offering a pretty penny on top of that to bring in the woman you have with you. He wants her alive.”

From the sound of the man’s voice, he hadn’t moved and was off to his right. Mingo fought the urge to whirl and fire, but shooting blindly was not his way. He wouldn’t risk wild shot that could injure a horse, and gunfire would bring others into the fray. Shadows were both his enemy and ally, depending upon how he used it.

“The way’s clear behind you, so back towards the open wagon door, and keep your hands away from your body. When I heard the talk of a Mexican man traveling with a white woman, and they were staying at the hotel, I figured I’d hit pay dirt. I was just supposed to worry you into making a wrong move. Never thought I’d be the one to catch you.

“I’m taking the woman to El Paso. You, I’m locking up in the back room of the saloon for safe keeping…unless you give me an excuse to kill you right now, which I’ve a yearning to do. I can’t miss at this range. It wouldn’t do my reputation any damage to be the man who took down Mingo Valderas.”

Now, he knew who he was up against. Earl Johns was vicious and a killer, a back-shooting coward. Mingo inched backward, buying thinking time.

“She’s too close for your comfort.” Elizabeth’s voice cut through the night. The sound of a shotgun hammer pulling back was an angry, lethal sound that made the hairs on Mingo’s arms prickle.


The Comanchero's Bride is available on Amazon.com. 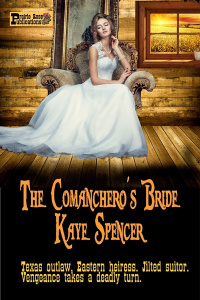 The Comanchero's Bride is also included in this boxed set of
six full-length historical western novels.

Under a Western Sky 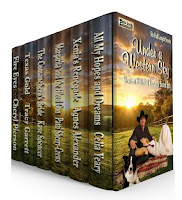 For your listening pleasure, here is Marty singing Meet Me Tonight in Laredo.


Do you have a favorite Marty Robbins song or story? Please share. I'd love to read about it.

Writing through history one romance upon a time