So why "Pikes Peak or Bust'? Well, the peak sits the eastern most in the mountain chain that runs through Colorado. Additionally, it is a stand alone fourteener peak. The nearest at its elevation or higher is over seventy miles away. In other words, its the landmark you see first as you're heading west.

And by 1900 Colorado was providing more gold than any other area, including Alaska, most of it coming from the Cripple Creek/Victor mining district. (They're still pulling gold out of that mountain) But there was/is more than just gold in those mountains and the plains. Colorado, thanks to the area around Leadville, also produced large amounts of silver. The state also has provided the world with marble, zinc, lead, molybdenum, uranium, nahcolite (which produces baking soda and soda ash) in addition to gemstones.

If anyone had watched the weather channel show "Prospectors" you would know about the gemstone mining in the state. Here's a brief look: Prospectors Episode

Colorado also has diamonds, which have been mined up near the Wyoming boarder. Add to this coal mining which has occurred almost since Colorado was settled and you have a wealth of mining and mining history. Colorado Springs in the 1800s had fifty active coal mines in the area. Of course, Fremont county had numerous coal mines as did the southern part of the state where the Ludlow Massacre occurred.

The pulling of  'treasure' from the ground created stories of wealth, life, death, strikes and massacres. These stories are mined by myself and others for the books, papers, and novellas we write. One novella "Never Had a Chance" came from a piece I read in the Sandra Dallas book.

If you wish to discover more, here are some books that have great pieces of information:

So do you want to do some mining? 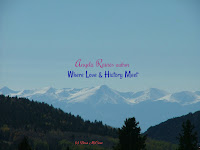