Barbers and Barbershops in the Old West: Part One by Vicky J. Rose, aka V. J. Rose, Easy Jackson

At the end of his cattle drive, the first thing a cowboy did was to buy new clothes and visit a barbershop. Whether or not the sign said barbershop or tonsorial parlor, because of the distinctive red, white, and blue pole, left over from the days when barbers practiced surgical techniques such as bloodletting, the cowboy would have little trouble finding it regardless of his ability to read.

Most barbershops were open seven days a week, from about 9 a.m. to 11:00 p.m., closing at noon on Sunday. If the cowboy arrived on Saturday, chances are the barbershop would be packed with waiting people. Women sometimes did go into barbershops to have their hair cut, but because their hair was often thicker and more difficult for the barber, the general rule was no women and children on Saturday.
The barbershop could be elaborate or small and plain, depending on the size of the town. The barber could be operating in the back of a saloon, especially in the far-flung mining towns where he might have a chair in the rear of a tent. However, using a razor and scissors on men fueled with alcohol is risky business, and most barbers would try to set up in their own shop as soon as possible. This was the Victorian era, and the barber would want to have the most ornate furnishings he could afford, most of which came from specialty mail-order houses. Every barbershop would have one or more spittoons, unless it had dirt flooring.
Inside the barbershop, the cowboy would catch up on all the news on a national, state, and local level. He would be advised on the best place to spend the night, have a meal, or find female companionship. In busy shops, the barber would employ porters to help with the towels, hone razors, refill urns with hot water, along with filling and emptying tubs. If the barber had children, boys as young as seven might be taught to shave customers on busy Saturdays.

When it came his turn in the chair, the cowboy would sit in a high chair with a separate footstool. The reclining chair as we know it was not patented until 1881, and then it quickly caught on. If the cowboy had ridden into a place like Dodge City in the latter part of the 1800s, he would have checked in his guns at the sheriff’s or marshal’s office when he came into town. If not, to avoid discomfort, he would remove his pistol from its holster and place it in firing position on his lap, allowing the barber to cover it with his cape. 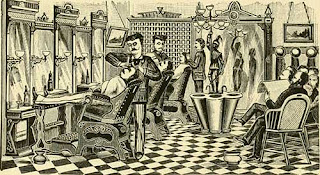 The cowboy would lean his head back, and hot damp towels would be placed over his face to soften his beard. Ideally, as the towels cooled, twice more warmer ones would take their place. After removing the towels, barbers in rustic areas would use a basin of water and a ball of soap to lather up, using their fingers to apply the lather to the cowboy’s beard. By 1870, most barbers were using shaving mugs with round bars of soap and shaving brushes, preferably made of badger hair. In large towns, there might be an elegant cabinet to hold personalized shaving mugs of regular customers.
Razors from the 1830s onward could have highly etched blades with trademarks, mottos, and ads. During the Civil War, blades with eagles, flags, and “Save the Union” on them were very popular in the North. The handles could be made of ivory, bone, mother of pearl, or gutta-percha. Most, however, were made of black or clear horn. Barbershops used the plainest one, but the barber would often have seven razors lined up in a row, the theory being that it would keep the blade sharper if it was allowed to “rest.” Before beginning, the barber would sharpen his razor, running it up and down the leather strop that would usually be hanging from his chair. A strop made of horsehide was considered the best.

When he finished shaving the cowboy, the barber would wipe his face with a towel that had most likely been used on several previous customers. He would then pat on Bay Rum shaving lotion and use a styptic pencil on any cuts he might have made. Jockey Club fragrance for men was launched in 1840 and became extremely popular.

After the shave, the cowboy would sit up straighter. If the barber was short, and the cowboy was tall, the barber would stand on a wooden box. In the 1800s, there were several popular hairstyles—the Jackson style, combed back and short like Andrew Jackson, or the half-shingle, the quarter shingle, and the pompadour. However, because barbering was unregulated until the beginning of the twentieth century, the cowboy’s barber may have only known one haircut, which he gave to everybody.

While the cowboy was getting his haircut, a dog might wander into the shop and plop down. Someone might start singing or playing a musical instrument, particularly at night, when barbershops often became places for jam sessions. If the barber was tired, he might be so loquacious, it would irritate the cowboy who was used to the quietness of the open plains. Or the barber might be so exhausted, he would be cranky and not inclined to conversation, also possibly aggravating the cowboy who might yearn for human interaction.

When the barber finished with the scissors, he would use the razor to shave the back of the neck. After combing or brushing the head to make sure all the loose hair was removed, he would use a soft brush sprinkled with powder to brush hair from the cowboy’s neck and shoulders. Some barbers were also quite proficient at giving the shoulders and neck a quick massage. If the barbershop was also a bathhouse, the barber would ask the cowboy if he wanted a bath.
The cowboy could be shaved, have a haircut, and bathe for about 75 cents. Although price wars in places like New York City were common, the phrase “Shave and a Haircut—Two Bits,” is good fit for the time frame of the Old West. For fresh water in his bathtub, the cowboy would probably pay 50 cents, but if he was willing to bathe in used water, the price might drop to 25 cents. On Saturday, however, the price of a bath might rise up to 75 cents. Before the faster manual hair clippers came into use in the latter part of the nineteenth century, a scissor cut and shave would take about 45 minutes.

If the cowboy stayed in town for a while, he would likely visit the barbershop three times a week to be shaved. If he developed an interest in a member of the fairer sex, he would bathe once a week, whether he thought he needed it or not, and get his hair trimmed every two weeks, or possibly every week should he think the situation warranted it.

In The Trail Drivers of Texas, compiled by J. Marvin Hunter, Jack Potter tells of joining a trail drive in 1882 headed for Colorado, near Greeley, as a sixteen-year-old cowboy in San Antonio. His wages were $30 a month and transportation back. On the way home, he stopped in Denver, going into a barbershop near the St. Charles Hotel.

“When the barber finished with me, he asked if I wanted a bath, and when I said yes, a negro porter took me down the hallway and into a side room. He turned on the water, tossed me a couple of towels and disappeared.”

Potter removed his clothes, letting the water run until the tub was nearly full. Not realizing the water was coming straight from a hot boiler, he hopped in, screamed “like a Comanche” and jumped out again, slipping and falling on the marble floor. After flopping around, he managed to get up using a chair for a brace. He stood fanning himself with his big Stetson hat and examining his feet to see if he still had toenails.  Like the jokester most cowboys were, he related this scalding incident with a laugh many years later. 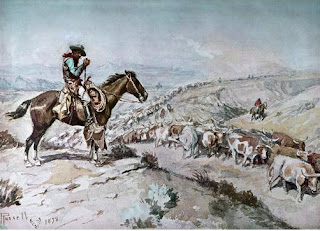 A Frontier Mystery
Posted by Vicky Rose at 12:30 AM