Part One discussed what a young cowboy might experience in a barbershop at the end of a long trail drive. Part Two focuses on the barber’s experience. 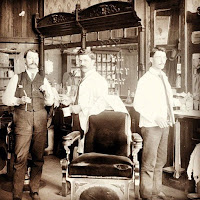 Barbers have always conjured up mixed feelings, even in the Old West. On one hand, a good barber who could be trusted was a treasure never be discarded. On the other, he was in a position of being able to slit one’s throat with a stroke of the blade. He was just as prone to vices as any ordinary man, gambling and womanizing were two. A barber who had a shaky hand and alcohol on his breath did not last long in the profession, however, so that usually wasn’t one of them.

Particularly in a one-chair shop, the barber became almost like a father confessor. His customers related their personal problems. Elderly men would talk constantly of the deceased wife they missed. Ranchers holding on by a thread would discuss their problems with the bank. He had to listen to everyone else’s difficulties and keep his mouth shut about them. Often, he was called upon to give advice. He might be asked for a loan, and many times, he would allow a man who was down on his luck to sweep out the shop in exchange for a haircut. He would have to listen to a preacher exhort him to come to Jesus even if he felt plenty religious enough. He was expected to know all the news of the world, everything going on in his town, and the latest jokes. And he often did.

In addition, if there was no doctor in town, he might be asked to use his sharp instruments to remove a bullet, pull a tooth, or even do an amputation.
The barber stood on his feet with his hands up in the air for long hours at a time and soon learned in order to make it through the day, he had to sit and rest when he could. A cowboy used to the rough outdoors would walk into a cozy shop, see the barber sitting and think what a lazy, cushy life he had, having no idea of the physical demands placed on a barber working 12 hours or more a day.

In order to make ends meet, a barber might combine his business with that of selling cigars, a shoe shine stand, or a gun shop. Some of the less scrupulous ones might use a back room for a bookie parlor or other unsavory deeds. In cow towns, a bathhouse would most likely be the barber’s other business.

A lot of money was made in selling tonics, and many barbers used their own recipes for bay rum, shampoo, hair dye, and baldness preparations. Some of them were extremely dangerous, but no conscientious barber would purposely poison his customers. His livelihood depended on their health. His counters might be lined with ornate bottles with fancy labels he had printed, or just plain bottles to hold his mysterious preparations. But they added to the atmosphere and mystique of his shop.

As mentioned in Part One, music was often an integral part of a barbershop. That particular harmonizing known as a “barbershop quartet” evolved in the middle of the 19th century—probably with roots in African-American singing. However, the term was not coined until early in the 20th century.

The powdered wigs of Colonial America had disappeared by 1837. The barber was no longer required to own a scarificator or other bloodletting instruments. The only socially acceptable men who could wear beards before 1858 were writers, artists, and pioneer settlers. A Massachusetts man in 1830 was arrested for refusing to shave his off.

Out West, it was a different matter entirely. Beards served as good protection against sunburn and frostbite. A miner panning for gold could not have cared less if his beard was long and his hair scraggly, but put women into the mixture, and suddenly everything changed. By the time the Civil War started, beards and mustaches had once again become popular. They stayed that way until the end of the 1800s. But to stay neat and attractive, mustaches and beards still required the services of the barber. His tools now included a mustache curler and an alcohol lamp for heating curling irons, and he carried mustache wax to sell to his customers.

Having shiny, slicked back hair also became highly fashionable. The main ingredient in these pomades was bear fat, and it would literally drip down the collar at times. Women got busy crocheting doilies known as antimacassars to protect their furniture.

With little understanding of germs, and without licensing inspections, patrons could give and receive impetigo, scabies, erysipelas, favus, tinea barbae, and head lice. These fell under the heading of “Barber Itch,” all easily spread by unclean towels, unsterilized razors, combs, brushes, and shaving mugs. Most barbers had special treatments for barber itch—vinegar mixed with tincture of muriatic iron applied with a feather being one. Coal oil soaked on the scalp for thirty minutes was the standard treatment for head lice, but the barber was well within his rights to tell the afflicted to treat themselves at home before coming back into his shop.

After the Civil War, African-American men entered the barbering profession in droves. There were no fees or licenses at that time, and setting up shop was a relatively inexpensive way to start a business. Most Anglos had no problem having a negro cut their hair or shave them. Because of the prejudice of the time, however, a negro man could not walk into a white barbershop and get a haircut, nor would he really want to. That type of curly hair takes a different training to learn to cut properly, and very few whites even today can do it without butchering it up. Because of its properties, head lice cannot survive in it, however. (By the way, head lice and body lice, known as “crabs,” are two different creatures.)

Indians had their own ideas about how to wear their hair and rid their body of it, so the majority of them would have no interest in entering a barbershop of any kind for years to come. However, if they had, during that time period, they probably would have been refused service in a white barbershop.

Mexicans, with their incredible eye for detail, made excellent barbers, but they too would rarely cross the color barrier with whites or blacks. Many of them used a process called singeing, using candles or singeing papers to give haircuts and shaves. It was believed to be beneficial for the hair and keep it from falling out. When done properly the customer only felt a little warmth on his face as his whiskers were being singed away. Anglo barbers adapted the process, doing it after the haircut to seal the ends of the hair. Burning hair smells terrible, and barbers would usually try to talk their customers into a shampoo afterward. This was accomplished by having the customer stand, leaning his head over a basin.

In 1867 Galveston, a thirty-year-old immigrant woman who called herself Madame Gardoni was doing a thriving business as a barber and employed two males in her shop. In 1870, a female barber in Detroit made the news in Emporia, Kansas. In 1883, a Spanish proprietor hired four girls to work in his Sedalia, Missouri, shop. Although the newspapers were complimentary to these women, in the general public, they were viewed more or less as shady ladies.
Danger
The barber was often called out to cut the hair of an ill man at his home, or go to the funeral parlor to clean up the deceased for a wake. The sick man was often sicker with an infectious disease than his relatives had let on, and the preparation of a dead body is only for the strong in stomach.

A wealthy cattle baron might pay a barber to come to his hotel room to give him a shave and a haircut. These hotel trips were not without risk, however. If the person requesting his services turned out to be a wanted man, the barber could very well be caught in the crossfire of a gun battle with the law. Young barbers, especially, were exposed to peril. In large cities, a young barber might suddenly find his privates being fondled. A quick way to put a stop to that was to put a cold razor on the offender’s neck and whisper how much one hated the sight of blood. The barber was also in peril of being attacked by a gang of ruffians once inside the hotel room.

The barber in the West was just as civic minded as his fellow citizens. In 1892, a barber joined in the attack on the Dalton Gang in the Coffeyville Raid, firing a load of buckshot that knocked Emmett Dalton off his saddle, effectively ending the raid.
In John D. Fitzgerald’s novelization of his mother’s reminisces about a Wild West mining town, he tells of a system of deputies the local sheriff organized to keep law. When one young punk came into town touting how many men he had killed, the sheriff gave him until sundown to get out of town. Ignoring the warning, he made the mistake of getting a haircut instead. The banty-sized barber, one of the sheriff’s deputies, loved to talk and didn’t seem to mind when the outlaw sat in his chair for a shave and a haircut. The process was considerably slowed by the barber’s loquacity, and when the sun went down on the other side of the mountain range, only half of the outlaw’s face had been shaven. The barber put down his razor, removed a Smith & Wesson from a drawer, proceeded to put the barrel in the gunman’s ear, pulled the trigger, at the same time saying, “I kill you in the name of the law.”


Guns were for killing outlaws; the razor was held in sacred trust for the barber’s chosen profession.


End of Part Two of Two
To Read Part One, click here: Barbers and Barbershops in the Old West Part One

And coming in February 2020 from Five Star Publishing