What's the Score? A Fistful of Dollars by Ennio Morricone 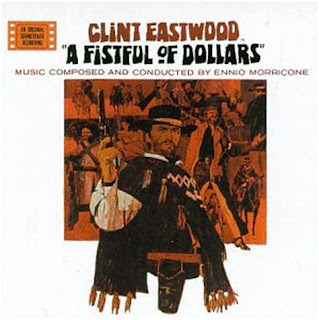 Say that to any western movie fan and a dozen iconic images come instantly to mind. Actors wearing ponchos and sombreros. Gritty, barren Italian landscapes posing as the American southwest, unorthodox camera angles, ultra-violence and exploding blood squibs. The faces of some of our most beloved actors appear — Clint Eastwood, John Weis, and others.

Along with Eastwood and Weis, Sergio Leone’s 1964 A Fistful of Dollars, sets the standard for some of the above, but for me it’s also got the music that defined a sub-genre.

The sonic salvo here is composed and conducted with flawless originality by Enno Morricone, credited as Dan Savio in the picture. It’s an iconic sound that would be copied over and over during the next couple decades but never surpassed.

Originally, director Leone had committed Morricone to create something similar to Dimitri Tiomkin’s El Deguello used in 1959’s Rio Bravo. Instead of relying on that theme, Morricone used a lullaby he had composed and developed the arrangement based on that and Peter Tevis’ version of a Woody Guthrie song—"Pastures of Plenty."

Arranged by Morricone, Leone heard the Tevis song and reportedly said “That’s it!” With uncanny skill, the composer worked all of his influences together to create the opening title piece, “Titoli.”

The track has everything we’ve come to expect from Morricone, the now famous clip-clop beats, the odd whistling, the cracking whips and the background chorus, and always, the traditional solo instruments. Trumpets and acoustic Spanish-guitars, flutes and violins, they’re all here to evoke that lonely wide open solitude of the West that can—at a moment’s notice—burst into rousing action.


Peter Tevis eventually recorded lyrics to Morricone’s theme for the film, though United Artists Records released a different set of lyrics called "Restless One" recorded by Little Anthony and the Imperials in order to reach a wider audience.

Some tracks, like “Square Dance” resound with old European classical vibes. Others like “The Chase” are purely 1960s action-movie schlock, and it’s a credit to Morricone’s skill that he welds all of it together so beautifully.

If you buy one Western soundtrack this year, make it A Fistful of Dollars.