July 10 is National Teddy Bear Picnic Day. Take your teddy out for a meal. Yes, Meg, I'm talking to you! 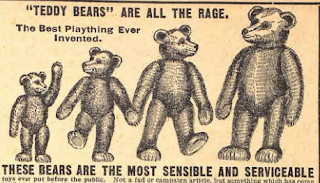 Unless your character was around after the turn of the century, he or she would not have seen an actual “Teddy” bear toy. The popular stuffed toy was actually invented in 1902. President Theodore “Teddy” Roosevelt went on a hunting trip in Mississippi with the intention of bagging a bear. After a week with no luck, his guides clubbed a bear and tied it to a tree. Roosevelt refused to shoot at such an unsportsmanlike target and Washington Post cartoonist Clifford Berryman immortalized the moment for the country.

In Brooklyn, New York, Morris and Rose Michtom created a soft stuffed bear toy to display in their stationery shop window. They put up a sign calling it “Teddy’s Bear,” and later formed the Ideal Novelty and Toy Corporation which was the first to produce the “teddy bears.” They were an instant hit. President Roosevelt even used the bear as his mascot when he ran for re-election. By 1908 the bears were so popular that a Michigan minister warned of decreased maternal instincts in young girls whose dolls were replaced by toy bears. 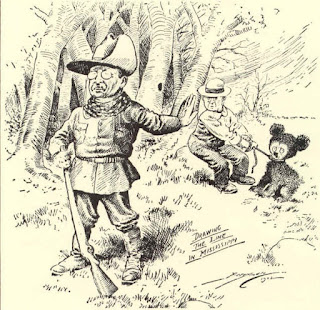 Of course, stuffed bear toys were not new. Enterprising parents all over the world would have crafted toys for their children, including those depicting local wildlife. There are still working bear toys in various museums, with the bear on all fours and often with a wheeled base. It’s likely your character may have had a rag bear toy to play with.

In 1899, Margarete Steiff registered patents for 23 soft toy designs, including a dancing bear and a bear handler with a brown bear. And shortly before Roosevelt’s hunting trip in 1902, Richard Steiff (nephew of Margarete) came up with a stuffed bear modeled after the ones in the local zoo. The Steiff jointed teddy bear was introduced in 1903. 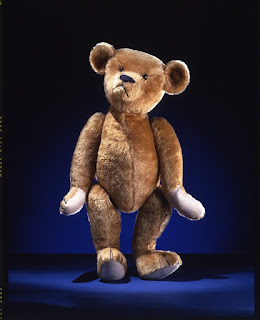 So while you can celebrate National Teddy Bear Picnic Day today, your character probably wouldn’t have known what you were talking about. But hey, have that picnic anyway!