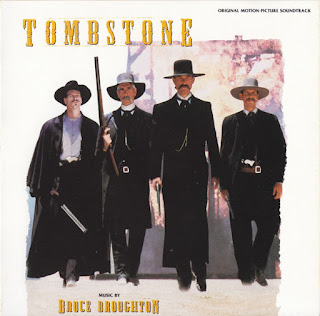 Tombstone (1993) has become a cult classic of the Western movie genre, and more than some films, it’s truly an ensemble piece. Director George Cosmatos, writer Kevin Jarre and strs Kurt Russell, Val Kilmer, and Sam Elliot come together in a meaningful take on the events surrounding the gunfight at the O.K. Corral and the Ear Vendetta Ride. Of equal importance to the film’s success, add the name of Bruce Broughton.

Born in 1945, Broughton composes music for film, television, video games, and orchestra. He’s won nine Emmy Awards and was nominated for an Academy Award in 1985 for what’s been called “breakthrough” work on the soundtrack to another Western, Silverado.


His work on Tombstone is more complex, and Jason Ankeny at AllMusic.com says: “Achieving a pitch-perfect balance between traditional Western film music -- e.g. the boozy saloon theme "Thespian Overture" and the landscape meditation "Looking at Heaven" -- and darker, more violent melodies fortified with slashing bursts of brass and thunderclap percussion, Broughton's score embraces both the reality and the mythology that now define the O.K. Corral in the collective consciousness."

Brass trumpets and sousaphones blast out at precise points in the screenplay, providing punctuation to the violence on the screen, and the underlying melodies not tie the characters together in a surprising way.

Unfortunately, while Silverado is available on vinyl (my preferred listening format) Tombstone is not. However, I’d be wrong to dismiss the CD. Broughton conducts the Sinfonia of London through an amazing two disk set that includes alternate cues and Jerry Goldsmith’s music for the Cinergi logo.