During the end of this year and going forward I hope to interview Western Fictioneer members on their new releases and writing. The plan is to post at least one and sometimes two interviews a month. For those who would like to be considered, you can contact me and I will give you the parameters and questions for inclusion. I am starting off with Jerry Guin who has had two releases this last quarter.

Enjoy the interview and take note of what makes Jerry's stories and journey so interesting. I know I learn from his continuing journey and hope you will also. 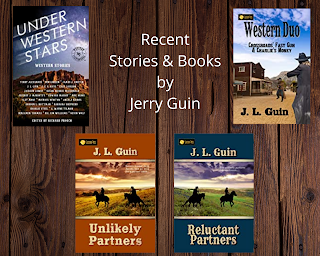 Jerry, when did you realize you wanted to write?

Back in 1995 a western magazine I was reading called for submissions.  I had some time on my hands and a computer, so I thought I’d give it a try.  Interestingly enough, my short story “Caught Red Handed” was accepted.  I wrote a couple more imagined stories to see if I could find a home for them. I soon found out that the correct way to submit a short story is to answer a call for submissions.

In 1997, my first book, a nonfiction guide, and journal,  “Matsutake Mushroom” was published by Naturegraph Publishers.

I've heard non-writers say they wonder where authors get their ideas. What sparked the idea for your book, “Reluctant Partners”?

That was easy.  I had a couple friends that asked about what happened to the characters in Unlikely Partners, the first book in that series, so I picked up the story where I left off and continued.  I might even do a third book.

Authors are many times put into categories of plotter or pantser. What do you consider yourself a plotter or a pantser?

I generally am a pantser.  The only beforehand plotting I do is to begin with a basic idea of someone doing a job, perhaps a lawman, perhaps a villain.  A circumstance develops involving that person which allows me to build on a story.

The exception to that is writing a second novel using first novel characters in order to continue the main plot of the first story.

I know, other than my Thursday writing group I have a hard time with routines. Do you have a writing routine or write when the muse calls?

Since retirement, I have no set schedule and write when the mood strikes.

You also had a duo of novellas released at the end of October. If you had a choice, do you prefer writing a shorter piece of full-length novels?

Well, I feel that novels are more desirable for a broad scale of readers and is more palatable to the eyes of my publisher.

I usually do not write a short story unless a call for submissions to a particular theme is made.

Thank you for sharing your time and process with us. Anything else you think people would find fascinating about you or your writing process?

After High school, I served in the U.S. Navy aboard the USS Mullany (DD528).  After my service, I worked various lumber labor jobs. After college, I then went into wholesale lumber sales for a good 25 years which included my own sales company for a few years.  Afterward, I finished my working career as plant manager for a local propane company.

During my working career, I was busy making a living while helping my wife raise our son and daughter. During those years, I did not find the time or desire to write until I was near fifty years old.

Now days, I write when I get an idea that I figure could be made into a worthwhile novel story. Once I take on that thought process, it could take as much as six months before I feel the story is finished and I could submit to my publisher, the great folks at Sundown Press.  Writing is not the only thing that I currently do.  I am an outdoorsman, have been all of my life, which has aided in my relating to the characters I write about and also, helps me to keep a clear mind and enjoy life.

If you are interested in Jerry's work check out his author page on Amazon: Jerry Guin