What's the Score? The Big Country by Jerome Moross 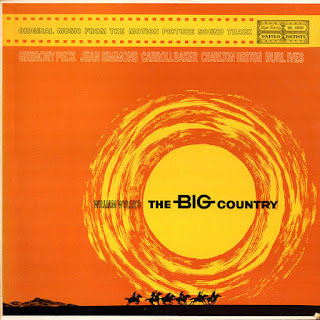 Nominated for an Academy Award for its musical score composed by Jerome Moross, The Big Country (1958) was an all around epic success.

The film was directed by William Wyler and starred Gregory Peck, Jean Simmons, Carroll Baker, Charlton Heston, and Burl Ives. Based on Ambush at Blanco Canyon, a serialized novel from the Saturday Evening Post by Donald Hamilton, the film was a hit with audiences.

Bruce Eder at Allmusic.com says “If it were possible to rate a record here at higher than five stars, this might be the place to do it, as a sort of "best of the best."

Like the themes in the movie itself, the soundtrack releases build on one another over time. In 1958 came the original 12-track vinyl release, then in 1988, a re-recording of the score by the Philharmonica Orchestra conducted by Tony Bremner. Finally, in 1991 a 42-track CD came out from Screen Classics which goes beyond the original record and harkens back to the film —although the original masters of Moross’s 80-piece orchestra had been lost.

Moross says he composed the main title after walking in the flatland around Albuquerque, New Mexico in 1936, and indeed the majesty and open expanse of that geography is echoed in the music.

Moross is best known for The Big Country, but also made music for The Adventures of Huckleberry Finn (1960), The Valley of Gwangi (1969). He also composed the Season 3- Season 8 theme song for TV's Wagon Train based on his score for the 1959 film, The Jayhawkers.

After growing up on a Nebraska farm, Richard Prosch worked as a professional writer, artist, and teacher in Wyoming, South Carolina, and Missouri. His western crime fiction captures the fleeting history and lonely frontier stories of his youth where characters aren’t always what they seem, and the windburned landscapes are filled with swift, deadly danger. In 2016, Richard roped the Spur Award for short fiction given by Western Writers of America. Read more at www.RichardProsch.com
Posted by Richard Prosch at 1:00 AM