The Writer and the Dude Rancher: A Friendship Formed in the West

Mary Roberts Rinehart was working in her Pittsburg office in the early summer of 1915 when a man she’d never seen before knocked on the door. He was middle-aged and tanned, with a cheerful, open face. His name was Howard Eaton, and although he was also a Pittsburg native, he now lived in Wolf, Wyoming, in the Bighorn mountains. There, he and his brothers ran a place called Eatons’ “dude ranch.”

Howard had moved to Medora, North Dakota in 1879 and, with a partner, began to hunt and sell meat to the men building the Northern Pacific Railway, calling their business the Custer Trail Ranch. By 1882 Howard’s two brothers, Alden and Willis, had joined him and they formed the Custer Trail Cattle Company. Like other ranchers, they often hosted hunters and explorers who came out to see the West and experience the life of the cowboy. They offered food and lodging as a courtesy, but it didn’t take long to realize that their generosity was eating into their cattle profits. So, later in 1882 they bought a guest book and started charging men to stay at their place. What they created was the genesis of the dude ranch.

Their concept was so popular that in 1903 the brothers sold the place in Medora and bought property and buildings in Wolf, Wyoming, near Sheridan. In 1904 they opened Eatons’ which, from the first day, was a full-time dude ranch.

Howard was also the most respected hunting and packing guide in the Rocky Mountain West. When he came to Pittsburg on that summer day, he was in town to organize a pack trip into newly-opened Glacier National Park in July.

Mary was a renowned writer of clever mystery novels and plays, and had just returned from Europe, where she had worked as correspondent in the early years of World War I. Howard dropped in on the famous author to ask if she and her husband would join the Glacier trip. He was a natural businessman, and knew that having a big name along would be good for business, especially since everyone would gather at Eatons’ dude ranch before heading out.

Mary’s husband, Dr. Stanley Rinehart, thought this was a great idea. His wife was still suffering from the effects of what she’d seen in Europe, working night and day on her writing, and mourning the loss of a beloved uncle. Mary was already a superb horsewoman, and an outdoor trip on horseback was just what she needed. So, she reluctantly agreed to come along. She left for Eatons’ by herself, and her husband and three sons planned to follow her later.

Life on the Trail

Howard was a stern trail guide for the pack trip’s forty-two participants. One of them was famed western artist Charles Russell, the other celebrity along for the ride. After the first few days getting used to hours of riding and sleeping rough, the exhausted Mary began to thrive. She took note of everything she saw, both with her pen and her camera. The camp food also made her stronger. For breakfast the riders ate bacon, eggs, pancakes with molasses, and black coffee. Lunch was more coffee and thick sandwiches. Dinner was usually fried beef and potatoes with…coffee.

Mary’s enjoyment of the trip was cut short when a ranger showed up in camp with a telegram. Her husband Stanley was in the hospital after an emergency operation for appendicitis, a dangerous condition in 1915. She gathered her belongings and followed the ranger at a gallop back down the mountain and caught the next train for home (her husband recovered).

Despite having to leave early, this trip changed her life, and Mary and Howard became lifelong friends.

Inspired by her travels

In 1916 Mary published Through Glacier Park: Seeing America First With Howard Eaton. More than just a travelogue, the book is a sometimes-hilarious celebration of wandering the unspoiled West, which had entranced her from the very first day. 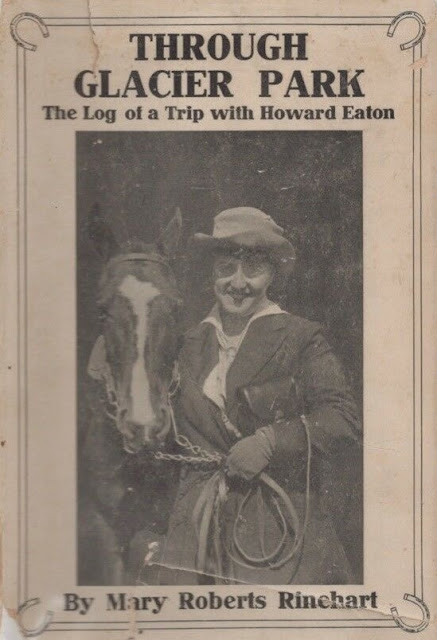 Mary and her family started taking regular vacations at Eatons’ dude ranch, where they would spend weeks at a time. It didn’t take long for her to get onto a first-name basis with the hands. She took these deeply-loved days and worked them into another travel book called The Out Trail, which she published in 1923. It’s a multi-chapter description of the experiences on her many travels around the U.S. and Mexico. One chapter is called “The Dude Ranch,” and is all about Eatons’ and Howard Eaton himself. If you want to know what life was like on a dude ranch in the early 1920s, this is the book for you.

Mary dedicated The Out Trail to Howard Eaton, who had died in April of 1922. The dedication read: “To the Memory of Howard Eaton,” followed by a quote from Kipling: “…the men bulk big on the old trail, our own trail, the out trail/And life runs large on the long trail, the trail that is always new.”

Howard’s death from peritonitis in a Sheridan hospital was a shock to Mary, who spoke publicly about the loss of her friend. So did Charles Russell, and newspapers across the country also carried Howard’s obituary. He would probably have appreciated the headline in his hometown paper, the Pittsburgh Daily Post: “Howard Eaton Missed ‘Dying With Boots On.’” After a funeral was held in Sheridan, his body was returned to Pittsburgh and cremated.

In July of 1923 a trail near Yellowstone was dedicated as the Howard Eaton Trail, though it was mostly abandoned in the 1970s and only portions of it can be hiked today.

The West stayed with her

Throughout the 1920s Mary continued to write books and articles about dude ranching, as well as a novel. The rest of her career was devoted to works of mystery and romance, but the West she saw with Howard Eaton enriched her life forever. This quote from Through Glacier Park says it all.

“Throw off the impedimenta of civilization, the telephones, the silly conventions, the lies that pass for truth. Go out to the West.”