November 5 marks the 150th anniversary of the “Wickenburg Massacre,” a stagecoach shootout that, to this day, still inspires lively and sometimes heated arguments among historians.

The arguments are about who actually did the killing. Was it the local indigenous people, the Yavapai? Was it Mexicans? Or white men? A combination of all three? The problem is that the evidence left behind can be interpreted a number of ways, and the even the two survivors gave conflicting (and sometimes changing) stories.

Here’s what we do know: at 7:00 a.m. on November 5, 1871, six men and one woman boarded a stagecoach outside James Grant’s station in Wickenburg, Arizona, along with the driver. They had arrived the night before from Prescott, and were all headed to families or businesses, from Ehrenberg to San Francisco and points East. One Wickenburg man got on board that morning and squeezed into the coach.

John Lance (or Lanz) was the driver. Charles S. Adams worked for the W. Bichard & Co. flour mill in Prescott and was going to San Francisco. Aaron Barnett was the Wickenburg businessman who hopped onto the stage just that morning. William Kruger was the Chief Clerk and Cashier for the Army Quartermaster for Arizona Territory, and planned to take up the same post in Ehrenberg. Mollie Sheppard was the only woman on board. She has been variously described by historians as “a member of the demimonde,” a prostitute, or a madam. Whatever she was, she had sold her Prescott house and was on her way to San Francisco. Frederick Shoholm closed up his Prescott jewelry business and his final destination was Philadelphia.

Three members of Lt. George M. Wheeler’s United States Geological Survey were also on board. They had spent nearly six months exploring California, Utah, Nevada, and Arizona, and were all bound San Francisco: Peter W. Hamel was a draftsman and topographer. William G. Salmon was one of the survey’s teamsters. Bostonian Frederick W. Loring was a twenty-one-year-old rising literary star and the expedition’s secretary. (Here he is with his mule, Evil Merodach.) 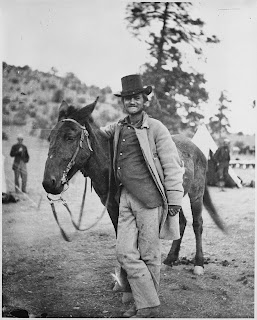 Loring and Adams chose to sit on top of the coach with the driver, while everyone else huddled inside against the chill of the morning. Then, about two miles out of Wickenburg, Barnett yelled at Lance to stop the coach. He said he’d forgotten to do something, so he got off the stage, and started walking back to town.

Around 8:00 a.m., as the unwieldy vehicle turned into a dry wash about eight miles out of town, Lance screamed, “Apaches!” In the next moment, a barrage of gunshots pierced the stage, it swung around wildly, and then halted with a jolt. Shots continued to ring out, and when they stopped, Charles Adams, Peter Hamel, John Lance, Frederick Loring, William Salmon, and Frederick Shoholm were dead. Mollie Sheppard and William Kruger, both wounded, managed to jump out and run, and got away from the killers, who soon took off. The survivors were rescued and told military officers and reporters about what had happened.

The next day, a quickly-formed posse rode to the scene and took the bodies of everyone except Salmon to Wickenburg for an inquest (searchers found his body later a few yards away). A coroner’s jury met in town on November 6, and they concluded that Indians had done the killing.

Reporters agreed, and used the phrase “Wickenburg Massacre” in their headlines. Massacre meant Indians, and the blame fell on the local Tolkepaya Yavapai people who lived around Wickenburg and at the Camp Date Creek army post about thirty miles away. Around 1864 white settlers had started calling them “Apache-Mohaves,” which is both historically and linguistically incorrect, and government officials soon adopted the name, too.

And the motives for the attack? There was no shortage of those, either, and they ranged from revenge to robbery to men looking to profit off the tensions between Anglos and Indians.

The evidence against the Yavapai included things left behind (moccasin tracks, and artifacts like butter tins and playing cards which indigenous people sometimes used), and possibly one scalped passenger. Posses followed tracks to Camp Date Creek, where some men were found to have greenbacks, maybe from Kruger or Sheppard's luggage.

But there were other explanations, which people around the area did not hesitate to talk about. For example, a Wickenburg woman supposedly told a local teamster not to take the stage because she heard some Mexican men making plans to rob it. And why didn’t the Indians take the horses, harnesses, blankets and other goods which were left behind? One official report said that the moccasin tracks headed toward Camp Date Creek turned southeast and never went into the post itself. There were also explanations for where some of the men got their paper money.

Mollie Sheppard thought she saw white men among the attackers. Were they all white men? Could some of them have been Mexicans after all? Maybe only a few of the estimated fifteen men were Yavapai. Doubts about the Indian "outrage" were raised all over the country as articles filled national papers. This one ran in the December 1, 1871 issue of the Evening Star, in Washington D.C.

Whatever the motives or perpetrators, the result was the removal of the Yavapai to the Rio Verde and then San Carlos reservations between 1873 and 1875. They fought against this move for years, and began to return to their homelands around 1900. And although the bodies of the murdered were buried in Wickenburg, no one really knows where they are, and it’s possible the coffins were moved in the 1940s.

A monument commemorating the event and the victims sits at the approximate site of the massacre, put up by the Arizona Highway Department in 1937. It's on Hwy. 60 near the entrance to the Flying E Ranch and includes a plaque which gives the names of the dead, and the murderers: Apache-Mohave Indians. 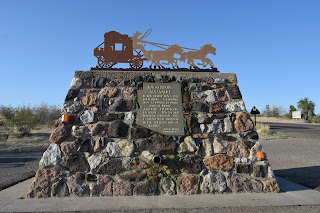 Will historians ever agree on who committed the Wickenburg Massacre? Without new and stronger evidence, possibly not. But continued discussion is a good thing and new interpretations could bring us closer to an answer. Native American oral tradition must also be part of the story. But what’s most important is remembering who died and how their deaths changed the history of Arizona and its indigenous people.