On This Day in the Old West: February 11

On this date in the Old West (or thereabouts), a couple of fuel-related events occurred. In 1808, anthracite coal was first burned as an experimental home fuel in Wilkes-Barre, Pennsylvania. Sure, it’s not exactly the West, but it was a major turning point in American fossil fuel history.

Anthracite, also known as hard coal or black coal, is a hard, compact variety of coal with “a sub-metallic luster.” It has the highest carbon content (between 86% to 97%), the fewest impurities, and the highest energy density of all types of coal and is the highest ranking of coals. It ignites with difficulty and burns with a short, blue, smokeless flame. The word anthracite comes from the Greek anthrakites or “coal-like,” Other terms for this coal are stone coal, dark coal, coffee coal, blind coal (in Scotland), Kilkenny coal (in Ireland), crow or craw coal, and black diamond. One particular term, “blue coal,” is used to denote a once-popular, trademarked brand of anthracite, mined by the Glen Alden Coal Company in Pennsylvania. They sprayed their anthracite with a blue dye at the mine before shipping it to northeastern US markets, to distinguish it from its competitors. 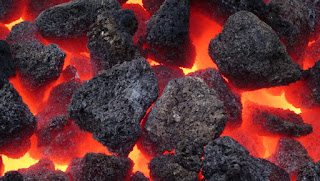 Anthracite has been burned as a domestic fuel in Wales since at least medieval times, but in the United States, anthracite history began in 1790 in Pottsville, Pennsylvania, with the discovery of the coal by hunter Necho Allen, in what is now known as the Coal Region. Legend has it Allen fell asleep by his campfire at the base of Broad Mountain and woke to the sight of a forest fire because his small flame had ignited an outcrop of anthracite. By 1795, an anthracite-fired iron furnace had been built on the Schuylkill River.

However, anthracite was not used as a residential heating fuel until 11 February 1808, when Judge Jesse Fell experimented with the fuel in Wilkes-Barre, Pennsylvania on a open grate in a fireplace. Anthracite differs from wood in that it needs a draft from the bottom, and Judge Fell proved with his grate design that it was a viable heating fuel.

In the spring of 1808, John and Abijah Smith shipped the first commercially mined load of anthracite down the Susquehanna River from Plymouth, Pennsylvania, marking the birth of commercial anthracite mining in the United States. The use of the fuel was inhibited by the difficulty in igniting it—a particular concern in smelting iron using a blast furnace. With the invention of the hot blast in 1828, which used waste heat to preheat combustion air, anthracite became a preferred fuel, accounting for 45% of American pig iron production within 15 years. From the late 19th Century until the 1950s, anthracite was the most popular fuel for heating homes and other buildings in the northern US (until it was supplanted by oil-burning systems and, more recently, natural gas). Many large public buildings such as schools were still heated with anthracite-burning furnaces through the 1980s.

An interesting side note: during the Civil War, Confederate blockade runners used anthracite as a smokeless fuel for their boilers to avoid giving away their position to the blockaders. 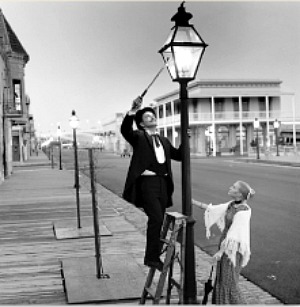 On 11 February 1854, another fuel-related event occurred, this one about as far West as you can get. For the first time, coal gas was used to light major streets in San Francisco. Though only about three miles of mains had been laid and only few streets and leading homes were lit, the lines were extended every day.

In the 1850s, manufactured gas was introduced to the United States for lighting purposes. Larger cities in the East built gasworks, but the West had no such industries. At that time, San Francisco had only oil streetlamps, and those only on Merchant Street. Three brothers—Peter, James, and Michael Donahue—were running the foundry that became the Union Iron Works (largest shipbuilding operation on the West Coast) when they became interested in manufacturing gas. They enlisted the help of an engineer and clerk at their foundry, Joseph G. Eastland, and began gathering information.

In July, 1852, James received a franchise to build a gasworks, lay pipes in the streets, and install street lamps to light the city with “brilliant gas.” The Common Council of the City of San Francisco specified that the gas should be supplied to households “at such rates as will make it to their interest to use it in preference to any other material.” The Donahue brothers and Eastland incorporated the San Francisco Gas Company on 31 August 1852. This became the first gas utility in the West.

The official seal of the San Francisco Gas Company bore the inscription “Fiat Lux,” which means “Let there be light” (the same slogan later adopted by the University of California). They had eleven original stockholders and the three Donahue brothers subscribed for 610 of the 1,500 shares. The company charged fifteen dollars per thousand feet for the gas at a time when coal brought thirty-five to forty dollars a ton and labor rates were six to seven dollars a day.

To celebrate the first lighting, the company held a gala banquet at the Oriental Hotel. During this, it was pointed out that James Crooks had erected the first streetlamps in the city in October, 1850. These were the oil lamps along Merchant Street and were paid for by subscription. Within a few months, similar oil lamps were erected on Montgomery, Washington, Clay, and Commercial Streets. All except four were destroyed in the Great Fire of May, 1851. Crooks continued to install more oil lamps until the Donahues introduced gas lighting. 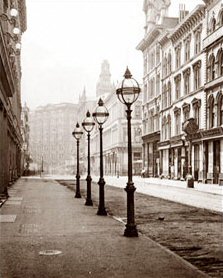 If your characters lived in the Northeast during the early 1800s, they might have purchased “blue coal” to heat their home. If they were in San Francisco during the 1850s, they might have witnessed the beginning of gas street lighting. Of course, after 1854, your characters in San Francisco would have noticed the many gas streetlamps illuminating the City by the Bay. Hopefully, these fuel facts will help you add a bit of extra flavor to your Western novels. Stay tuned for more history factoids next month.