On This Day in the Old West: April 8

Today, the milkman cometh … with glass bottles! On April 8, 1879, glass bottles were first used for milk delivery in New York City. It took a while for them to catch on but catch on they did, and the rest is history. 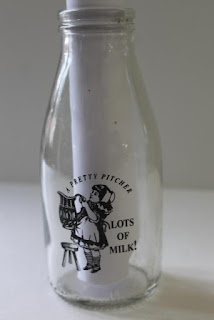 Until this time, people carried their milk in whatever containers they had handy: buckets of all sorts (and of all levels of cleanliness), repurposed jam jars, and even recycled kegs. Milk delivery was hardly a sanitary industry and it’s little wonder disease was rampant in those days. However, in 1979, Echo Farms Dairy in Litchfield, Connecticut first introduced their purpose-made glass milk bottles to New York City customers. Other dairies waited to see how much breakage Echo Farms would incur before they jumped on the bandwagon, and some customers didn’t care for the drugstore-look of the bottles. But the new method of delivery eventually caught on. By the early part of the 20th Century, some cities even required milk to be delivered in the new-fangled glass containers.

The new bottles were not only cleaner than the odd pail or bucket, they looked better as well. Many had the name of the dairy embossed into the glass. They came in many shapes, too, including models with stoppers on wire loops, like the types of bottles still used today by European and specialty breweries. 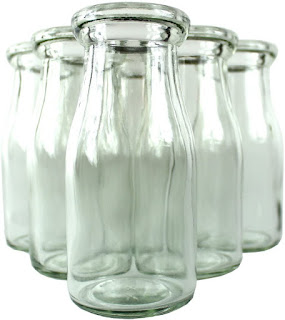 Since milk has such a short shelf life, consumers used up their allotment quickly and returned the bottles whenever they went into town—or whenever the milk truck next came by their house. The average milk bottle made 22.5 round trips in the early 1900s before being broken, lost, or used for other purposes by the consumer. This loss of bottles, as well as the expense of returning them to the factory for washing and sterilization, eventually led to the downfall of the glass bottle.

Milk producers and consumers alike were also concerned about the cleanliness of carrying unwashed, empty bottles in the same space as the supposedly clean, full bottle. And the milkman was no help. If you wanted a pint, he’d just pour out half of a quart bottle into an empty—and not-yet-washed! —bottle to fill your order. Or combine two pints in the same way.

All these concerns led to the development of the single-use container. The first wax containers appeared in the 1890s. They came in various shapes, from cylinders to truncated pyramids to cones—even some that mimicked the look of the original glass bottles. The shape that eventually won out in the 1940s was the rectangular column, with a flat top and a small, round pull-up cap. These took up little space in a milk truck, being lightweight, compact, and uniform in shape. It wasn’t until the 1950s that the flat-topped containers were replaced with a gable top, which opened into a spout for easy pouring, a design that had actually been patented in 1915. 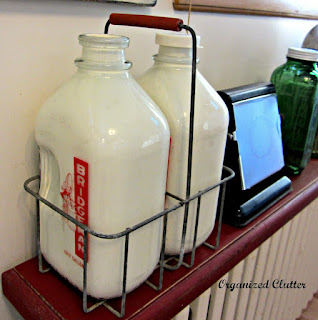 Your characters may or may not have had milk delivery, depending on how far out on the frontier they lived, but by the end of the century they’d have encountered a glass milk bottle or two, even if it had been co-opted for some other use. Just keep in mind that before this date in 1879, they’d have carried their milk home in a pail or bucket, not a bottle.