Wow—where has the year gone? June already and we’re into the sweltering Summer. It’s a good time to talk about refrigeration! On June 10, 1869, the first shipment of frozen beef arrived in New Orleans aboard the Agnes. And, of course, there’s a story behind it. 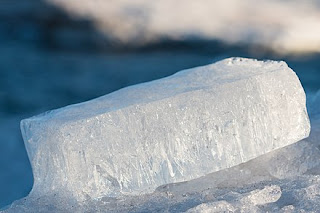 Commercial refrigeration theories came mainly from Europe, particularly the Scots, English, and French. However, it was the Texans who did most of the early experimental work to develop the techniques in the United States. “The development of mass production of artificial ice,” according to Woolrich and Clark, “was pioneered in Texas and Louisiana.” However, the most interesting bit of refrigeration history comes from 1861 to 1885 in Texas.

During the Civil War, the natural ice supply from the North was cut off. Inventors in Texas and Louisiana began looking at mechanical ice manufacture and food preservation. During the war, a Ferdinand Carré absorption machine, patented in France in 1859 and in America in 1860, was slipped through the Union blockade into Mexico and then into Texas. This machine used a mixture of ammonia and water as a refrigerant.

Somewhere around 1865, Daniel Livingston Holden installed a Carré machine in San Antonio and began making improvements to the machine. He equipped it with steam coils and used distilled water to make clear ice. By 1867, three different companies were making artificial ice in San Antonio—at a time when there were only eight ice plants in operation in the whole country. Sometime around 1866 or 1867, Holden had gotten the Peter Henri Van der Weyde compression patent, which used petroleum ether and naphtha as refrigerants, and in 1869, he took out a patent on his own designs.

In that same year, Holden assisted in the installation of a sixty-ton-capacity Carré plant in New Orleans and extended his refrigeration activities across Texas and into the South. After the Civil War, the expanding Texas beef industry “encouraged and financed research” into cold storage. Andrew Muhl of San Antonio, in partnership with “a man named Paggi,” built an ice-making machine in 1867, then moved it to Waco in 1871. In the late 1860s, the development of mechanical refrigeration for the Texas beef industry began in Dallas with Thaddeus S.C. Lowe’s carbon dioxide machines. These machines had originally been utilized to fill balloons he’d used for military purposes but were not used to create dry ice.

With the dry ice manufacture in place, Lowe designed a refrigerated ship in 1868 called the William Tabor. Lowe was in competition with Henry Peyton Howard of San Antonio, whose steamship Agnes was fitted with a cold-storage room twenty-five by fifty feet in size. The men planned to ship frozen beef to New Orleans. When they arrived, the William Tabor drew too much water to dock in the New Orleans harbor, so Agnes won the prize. In July, Howard threw a huge party at the St. Charles Hotel, where he served his transported beef to his guests.

Because Lowe failed to accomplish his goal, he didn’t receive proper credit for his attempt. However, his “singular accomplishment” of a refrigerated ship established the compressor process of refrigeration used in ships delivering frozen beef to New York and Europe. Carbon dioxide, after all, is nontoxic and inflammable. It was used as a refrigerant by the military well into the Twentieth Century.

Daniel Livingston Holden came back into the picture between 1871 and 1881, when the first mechanically refrigerated abattoir in America was “planned, established, and successfully operated” in Fulton, Texas. This was designed for the express purpose of chilling and curing beef for transport to Liverpool, England, along with other destinations across the pond. Holden, his brother Eldridge, and Eldridge’s father-in-law George W. Fulton took part in the development of this new process of beef packing and shipping. There were many further innovations in the refrigeration industry, mostly from Texas, but that’s the gist of the early history of the process.

Your character, depending on when they lived, could have benefitted from the transport of frozen beef from Texas, or even been involved in the process. Perhaps they worked at one of the refrigeration plants or in the abattoir itself. Maybe they were sailors aboard one of those two famous ships or had relatives who were. Refrigeration did exist in the Old West and your characters could easily have been aware of this fact.