The Forgotten Veterans
by Jacquie Rogers

Today is May 31, which in my mind is Memorial Day.  Yes, I know people prefer a three-day weekend, so it's the fourth Monday in May now, but when I was growing up (showing my age here!), it was May 31.

Most everyone in Owyhee County did the same thing--load up the trunk of the car with flowers cut from the garden (a whole ritual itself), get the kids in the car, the dog out of the car, and drive to the cemeteries.  We went to four: my dad's brother, who was killed in the final days of World War II, is buried in the Wilder cemetery.  My great-grandmother and great-great-grandmother are buried in Parma.  Mom's father and other family members were in the Caldwell cemetery, and we had several family friends (and now my parents) in the Homedale cemetery.

After cleaning and decorating the graves, we'd all congregate at a designated relative's house and have a huge potluck dinner.  Some years, the American Legion put on a ceremony with a three-volley (if I remember right) salute.  It always touched my heart and we never missed going to one.

On Facebook and Twitter, there are a bazillion memes about our fallen warriors--WWI, WWII, Vietnam, Korea, and the Middle East.  Some even include Civil War.

Today, I read an article in The Owyhee Avalanche that reminded me of other veterans who’ve served our country—the men who were sent to the West to fight the Indian Wars.  And not just the fighting soldiers, but all the support staff as well.

In the mid to late 1800s, these men served their country in the best manner they could believing that they were doing the right thing for their country and fellow man.  They subsisted in harsh, primitive conditions and fought bravely in spite of their hardships.  The fact that genocide, by any measure, is wrong, does not negate the fact that they gave their all for our country.

One of these men was highlighted in the May 27, 1876, issue of The Owyhee Avalanche.  No, it’s not about his contribution to the war effort—it’s an article about the death of one of Silver City’s doctors. 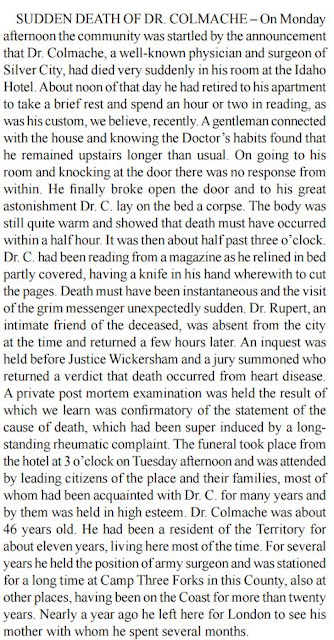 Thank you to all the veterans who paved the way for the rest of us to live free.

Posted by Jacquie Rogers at 5:11 AM