Illustrators and writers, especially those new to the craft, found plenty of work between 1920 and 1950 when hundreds of inexpensive fiction publications—commonly referred as "Dime Westerns"— flooded the American market. 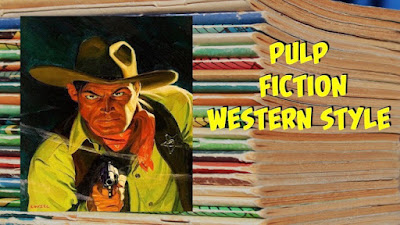 To satisfy the appetite for these magazines, covers and thousand of inside pages needed art and written story lines, produced in assembly-line fashion on a weekly or monthly basis.

The pulp magazines, which sold for between a dime and 25 cents, measured six-by-nine inches in size and were made of cheap wood pulp paper, which made the manufacturing process economical.

The 32-page Dime Western novels were popular. Distribution averaged in the tens of millions.

The most popular pulp themes centered around cowboys and Indians and the Wild West.

According to The Pulp Magazine Project, the inaugural issue of the first all-western pulp appeared on newsstands July 12, 1919—Street and Smith's Western Story Magazine.

Frederick Faust, also known as Max Brand, ranked among the most versatile of the writers. He sometimes wrote as many as three stories for a single issue but under different pen names.

Others included Paul S. Powers, who wrote for a variety of magazines, including Wild West Weekly, Thrilling Ranch Stories, Exciting Western, and others.

Laurie Powers, his granddaughter, discovered six stories never before published and included them in a book she edited, called Riding the Pulp Trail, Altus Press (2011) and consists of twelve Paul Powers stories.

At the same time, plenty of no-name writers logged grueling hours for paltry wages—no more than a penny a word—to meet the production demands of pulp magazines.

John Dinan, who authored, The Pulp Western: A Popular History of the Western Fiction Magazine of America, wrote, "The art of the ballyhoo may not have been invented by dime-novel writers, but they certainly raised it to new heights."

Among the hundreds of publications, Western pulp fiction appeared in such magazines as:

By the 1930s, more than a thousand different pulp titles were in circulation. With the need to print so many publications, the industry got hit hard by paper shortages after World War II.

Some publishers, to trim expenses and keep pace, switched to digest-size formats that were cheaper to produce.

Declining popularity, however, proved an insurmountable problem.
The public began turning from pulp to other forms of entertainment, such as comic books, paperbacks, and radio.

Television drove the deepest nail into the pulp fiction coffin. Post-war sales of RCA television sets skyrocketed and helped accelerate the demise of the pulps. 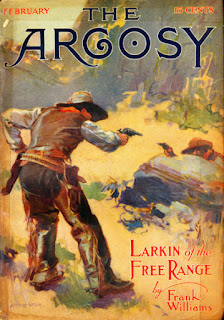 At the same time, talented writers discovered they could make much more money by writing novels and having them serialized.

Pulp Westerns proved an entertaining channel of storytelling while it lasted, and gave new writers and artists an unparalleled training ground.

Frank Munsey, an American newspaper and magazine publisher who launched the first ten-cent periodical in 1889, once wrote:

"The story is worth more
than the paper it is printed on."

Tom Rizzo invites you to “Discover the Historical West” and read about characters and events that shaped the American frontier. Join the StoryTeller Posse and receive occasional dispatches from the High Plains and beyond.