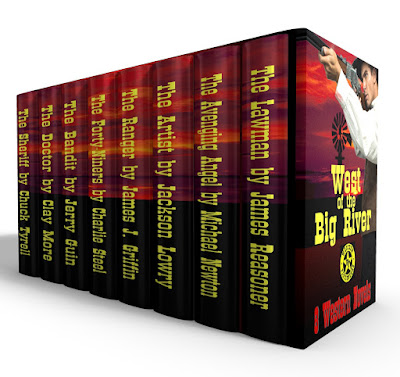 Eight West of the Big River novels, a series with an action-packed blend of history and fiction. Now you can get all eight for only 99 cents, or free if you have Amazon Unlimited. A bargain that is too good to miss.

West of the Big River: The Avenging Angel
Award-winning author Michael Newton spins an action-packed, historically accurate yarn about Orrin Porter Rockwell who is more than just a deputy United States marshal and a deadly gunfighter. He's a member of the Mormon Danites, the group of enforcers known as the Avenging Angels

West of the Big River: The Artist
Acclaimed author Jackson Lowry spins as entertaining a tale as any of those from Charlie Russell himself in this superb new historical novel.

West of the Big River: The Forty-niners
Charlie Steel's story of courage, romance, and danger is based on historical incidents of the California Gold Rush, and vividly illustrates a compelling chapter in American history, recreating a lawless era that exemplifies both the best and the worst in a vital young nation!

West of the Big River: The Bandit
Sam Bass was just a farm boy from Indiana, but he wound up in Texas and became one of the most notorious outlaws in the history of the Old West. Jerry Guin's historical novel THE BANDIT takes an unflinching look at the life and times of Sam Bass, from his almost accidental incursion into a life of lawlessness to his ill-fated end, and provides a vivid portrait of this violent era.

West of the Big River: The Doctor
In Tombstone, Arizona Territory, the town too tough to die, Dr. George Goodfellow is known as the Surgeon to the Gunfighters. Friends with the Earp brothers and Doc Holliday, his services as a doctor are needed in the aftermath of the Gunfight at the O.K. Corral. Goodfellow is handy with a gun and his fists, too, and he needs those skills to survive! An all-new, exciting novel based on actual historical characters and incidents by acclaimed Western author Clay More.

West of the Big River: The Sheriff
Outlaws ran wild in Apache County, Arizona Territory, until the day a long-haired, straight-shooting cowboy with the unlikely name of Commodore Perry Owens pinned on the sheriff's badge and set out to rid the county of lawlessness. Owens would need every bit of his gun skill just to stay alive as he cleaned up the territory! Acclaimed Western author Chuck Tyrell brings the illustrious career of Commodore Perry Owens to vivid life in THE SHERIFF.

Don't miss this great buy, eight based on fact western tales that will give many hours of great reading in one boxed set.