Time for a Tonic

Everybody "knew" that you needed a good tonic now and then to keep your body working properly. Here are some elixirs "good for what ails you" that your characters might have tried. When possible, I've included ingredients, prices, and the approximate dates the brands were on the market. I've also given some of the advertisements that promised their tonic would cure ... well, basically everything.

•    Old Dr. Townsend’s Sarsaparilla; 1850-1875, sarsaparilla, molasses, senna and 18-25 proof alcohol (“the most extraordinary medicine in the world”) claimed to purify the blood and cure rheumatism, pimples, spinal issues, eye sores, ringworm and dyspepsia
•    Turlington’s Balsam of Life (27 ingredients, good for “kidney and bladder stones, cholic, and inward weakness”)
•    Dr. Walker’s California Vinegar Bitters: 1861, various herbs, fermented, possibly sour beer and aloes
•    Mrs. N. Bailey’s Cascarilla Compound; 1870's (“The best Spring medicine of the age” “has cured thousands within the last fifteen years of coughs, colds, dyspepsia, salt rheum, dropsy, canker, piles, and many other diseases resulting from a vitiated state of the blood.”) $1.00 a bottle
•    Ellis’s Iron Bitters: ca 1869 (“will enrich the blood and prevent it from becoming watery and weak, give a healthy complexion, restore the appetite, invigorate the system and are very palatable. These bitters are recommended to all persons requiring a safe and valuable tonic, to impart tone and strength to the system, not given by Bitters merely stimulant in their effects; which, although they may possess tonic vegetable properties, cannot give the strength to the blood which the Iron Bitters will give”)
•    Peruvian Syrup: 1860s (“strikes at the root of disease by supplying the blood with its vital principle of life element - iron. For all diseases originating in dyspepsia, or a bad state of the blood, it is a specific”) 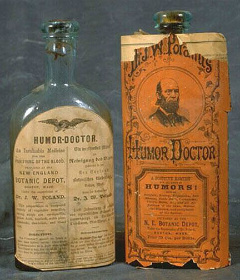 •    Dr. J.W. Poland’s Humor-Doctor; 1860’s-1870s ”A positive remedy for all kinds of humors, scrofula, scurvy, salt rheum, erysipelas, nettle rash, boils, carbuncles, ulcers and all obstinate affections of the skin; mercurial diseases and every taint of the system; dyspepsia and those diseases originating in the derangement of the digestive organs; viz. Bilious complaints, neuralgia, nervous affections, headache, languor, loss of appetite, depression of spirits and costiveness” “An invaluable medicine for purifying the blood")
•    Dr. E.C. West’s Nerve and Brain Treatment: 1870-1906 (“For hysteria, dizziness, convulsions, fits, nervous neuralgia, headache, nervous prostration caused by the use of alcohol or tobacco, wakefulness, mental depression, loss of memory, softening of the brain resulting in insanity, premature old age, barrenness, loss of power in either sex, involuntary emissions and spermatorrhoea caused by over exertion of the brain, self abuse or over indulgence”) “Each box contains 1 month’s treatment. $1.00 a box or 6 boxes for 3.00. By mail"
•    Dr. J Walker’s Vinegar Bitters: 1870-1890 (“Dyspepsia, indigestion, rheumatism, diarrhea, consumption, catarrh, bronchitis, neuralgia, headache, boils, ulcers, sore eyes, dropsy, scald head, paralysis, erysipelas, scrofula, tetter, skin diseases, bilious, remittent and intermittent fevers, pains in the back, shoulders, heart and chest, liver and kidney troubles, stomach ache, jaundice, gout and fits, colds and coughs, croup, palpitation of the heart, lead colic, nausea, biliousness, constipation, piles, worms” “A purely vegetable preparation manufactured from the Native Herbs of California. The great blood purifier and life-giving principle. Their alternative, solvent, diuretic and tonic properties exceed any medicine in the world.”) Directions: Take of the Bitters on going to bed at night from a half to one and one-half wineglassful. Eat good nourishing food such as beef-steak, mutton chop, venison, roast beef and vegetables, and take outdoor exercise. They are composed of purely vegetable ingredients and contain no spirit.
•    Greeley’s Bourbon Bitters: 1870 (“These bitters prepared of pure old Bourbon Whiskey and possess all of its stimulating tonic and medicinal power. Modified and improved in its action on the system by the addition of many simple alternative and bitter tonics making them invaluable. A remedy in the treatment of lung complaints, bronchitis, dyspepsia, liver complaints and general debility and weakness of the system”) Directions: A wine glassful should be taken before each meal. Ladies and children should begin with less quantity and increase. As an agreeable stomachic these bitters are unsurpassed. 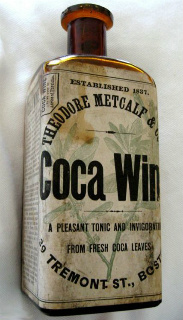 •    Metcalf’s Coca Wine (“A pleasant tonic and invigorator” “For fatigue of mind or body” “From fresh coca leaves and the purest wine” “Recommended for neuralgia, sleeplessness, despondency, etc.”)
•    Vin Mariani (“Popular French tonic wine” “Diffusible stimulant and tonic in anaemia, nervous depression, sequelae of childbirth, lymphatism, tardy convalescence, general malaise, and after wasting fevers; special reference to the nervous system, in all morbid states, melancholia etc.; tonic in laryngeal and gastric complications, stomach troubles; all cases where a general toning or strengthening of the system is needed; the only tonic stimulant without any unpleasant reaction, and may be given indefinitely, never causing constipation”) coca leaves in red bordeaux wine; a proper dose was two the three glassfuls per day, taken before or after meals (halved for children).
•       Dr. Pierce's Alterative Extract or Golden Medical Discovery: 1890-1906 gentian root, Oregon grape root, Bloodroot, Cherry bark, Queen's Root, Stone Root, Sacred Bark ("For the cure of all severe, chronic or lingering coughs, bronchitis, laryngitis, weak lungs, bleeding from lungs, public speaker's sore throat, hoarseness and suppression or loss of voice. A remedy for torpor of liver (generally termed 'liver complaint' or 'biliousness') and for habitual constipation of the bowels. For loss of appetite, indigestion and dyspepsia, and for general nervous disability or prostration, in either sex. An alterative, or blood purifier; valuable in all forms of scrofulous and other blood diseases. For skin diseases, eruptions, pimples, rashes and blotches, boils, ulcers, sores, and swellings arising from impure blood.") Tablets 50 cents, Liquid $1.00
•       Hoff's Malt Extract (Tarrant's): 1894-1906 ("A dietic and healing remedy recommended by European physicians for complaints of the chest and stomach, dyspepsia, obstinate cough, hoarseness, etc. and especially constipation; also a pleasant table beverage.") 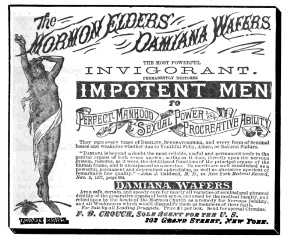 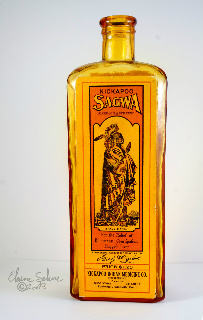 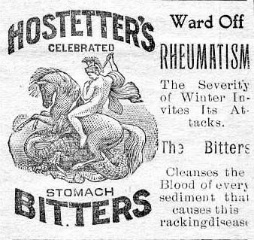 
www.facebook.com/JESHaysBooks
Posted by JES Hays at 8:16 AM