WARRIOR IN STONE by VONN McKEE 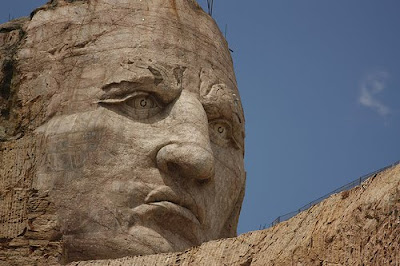 Lakota Chief Henry Standing Bear surveyed the faces of the four American great leaders carved into the sheer mountainside. For ten years, Standing Bear had pondered the white men hanging by scaffolds from the face of Mt. Rushmore, which happened to lie on his native homeland, the Black Hills of South Dakota. The irony stirred him deeply, and an idea came to him. Finally, in the fall of 1939, he wrote a letter to one of Mt. Rushmore’s sculptors, which read, ''My fellow chiefs and I would like the white man to know that the red man has great heroes, too.'' 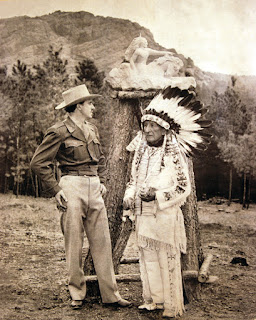 The sculptor was Korczak Ziolkowski and he became so intrigued with Standing Bear’s idea of creating a stone memorial honoring Native Americans that he eventually moved west to begin work. Standing Bear and the other Lakota leaders chose the warrior Crazy Horse’s likeness to represent them in stone.

It was Crazy Horse’s band of Lakota warriors who defeated Custer’s Seventh U.S. Cavalry battalion in the Battle of the Little Big Horn, known as "Custer’s Last Stand.”  The warrior Crazy Horse was killed in 1877 at Ft. Robinson, where he rode in under a flag of truce. A misunderstanding, possible the fault of a poor translator, led to a scuffle and Crazy Horse was mortally wounded with a bayonet.

In 1948, Korczak Ziolkowski’s hammer struck a chisel into the granite of Thunderhead Mountain, only 17 miles from Mt. Rushmore. Being a self-taught sculptor, he made many early miscalculations, some resulting in bodily injuries. He fell in love with Ruth, a young volunteer on the project, and eventually married her. The Ziolkowskis welcomed a total of 10 children. Ruth worked alongside him until his death in 1982, then took over supervision of the carving, taking to heart his instructions to “go slowly so you do it right.” At this point, not even the face of Crazy Horse was finished.

The privately funded transformation from mountain to statue has been a long one, and it is still not complete. Today, four of the Ziolkowski children and several grandchildren carry on the work. After 69 years of construction, the sons and daughters of Korczak Ziolkowski say they will not see completion of the statue in their lifetimes. (In comparison, the Great Pyramid of Egypt is thought to have been built in about 20 years.) Eventually, the image of Crazy Horse will be wider than two football fields and taller than the Washington Monument.

Crazy Horse’s pose was inspired by the story that, after the defeat of the Lakota, a derisive Cavalryman asked him the question, “Where are your lands now?” With his left hand pointing over his horse’s head, Crazy Horse answered, “My lands are where my dead lie buried.” 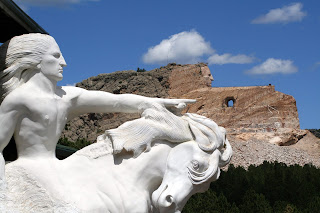 Strangely, a few years after the warrior’s death, a medicine man, Black Elk, told an interviewer that Crazy Horse had predicted to him: ''I will return to you in stone.'' The prophecy is coming true, one chip of granite at a time.

For more information about the Crazy Horse Memorial, visit crazyhorsememorial.org. 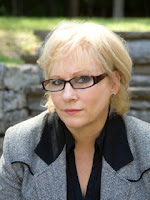