Your characters might have encountered America’s unique animal, the pronghorn. Pronghorns range throughout all four deserts of the American Southwest, from Sasketchewan, Canada south to Mexico. This animal’s scientific name, Antilocapra americana, means “American antelope goat,” but it is neither goat nor antelope. It is actually the sole surviving member of an animal family dating back 20 million years. It’s also called the prongbuck, pronghorned antelope, prairie antelope, and American antelope. 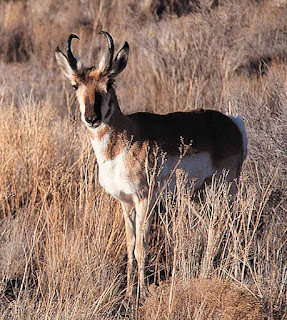 Pronghorns live in grasslands, brushlands, bunch-grass and sagebrush areas of open plains and deserts. They have deer-like bodies and weigh between 90 and 120 pounds. They stand about 3 and ½ feet at the shoulder and the upper body and outside of the legs are tan or brown. The cheeks, lower jaw, chest, belly, inner legs and rump are usually white.  Pronghorns have large, protruding eyes and a white or buff, 4-inch tail. The male pronghorn has a broad, black band down the snout to a black nose and black neck patch, together with black horns.

The pronghorn is the only animal in the world with branched horns – not antlers – and the only animal to shed those horns as if they actually were antlers. Their horns are lyre-shaped hollow sheaths over a bony core arising from the skull directly over the eyes. Male horns may grow to 20 inches with a short prong jutting forward and upward from the base. Like sheep and goats, pronghorns have gall bladders – and like giraffes, they lack dewclaws. 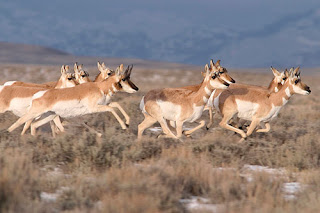 The pronghorn is the fastest animal in the Western hemisphere, running in 20-foot bounds at up to 60 miles per hour. And unlike the cheetah, pronghorns can run for hours at a fast pace. They live alone or in small bands during the summer and form large herds in the winter. Pronghorns can survive a temperature range of 180 degrees, from 130 degrees in the deserts to 50 below zero. They typically live from 9 to 10 years in the wild and 12 years in captivity.

Pronghorns are high-strung animals and are active day and night, alternating snatches of sleep with vigilant feeding. They are selective feeders, eating shrubs, grasses, juniper, chamiso and sometimes cacti and domestic crops. During the winter, desert populations are said to favor sagebrush.

Because they inhabit open terrain, pronghorns rely on their speed and keen eyesight to stay safe. They can detect movement up to four miles away, and when alerted to danger, their white rump hairs ruffle up and can be seen by other pronghorns up to two miles away. At the same time, the alerted pronghorn exudes a musky odor which can be detected for more than a mile. 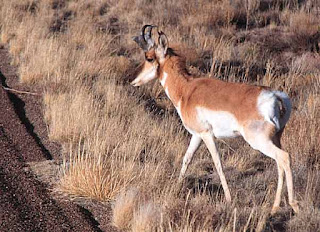 During late summer or early fall, male pronghorns gather a harem of three or four does. The animals shed their horns a month after breeding, and does usually produce twin fawns in early June after a gestation period of about 250 days. The young are born weighing from 4 to 12 pounds and lack the spots characteristic of deer and elk fawns. They have no odor and instinctively lie motionless for hours, which is their main defense against predators such as bobcats, eagles and coyotes. After a week of nursing, the does rejoin the main herd with their fawns.

It's estimated that during the mid-1800’s, pronghorns numbered in the many million, second only to the American bison. However, by the 1920’s, the US population had been reduced to about 20,000. Pronghorns cannot leap fences like deer can, so fenced rangeland has hampered their migration and survival. However, efforts to preserve the animals have helped revitalize the general population.
Posted by JES Hays at 12:00 AM