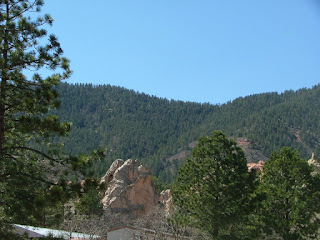 When you think of Colorado, you think skiing, mountains, and hiking or driving some remarkably beautiful scenery. However, as I work on my paper for the PPLD Annual History Symposium, this years topic, 'Remarkable Rascals, Despicable Dudes, & Hidden Heroes of the Pikes Peak Region', I ran across the need to research lynching for my despicable dude. While an uncomfortable subject, it became important to the story. You see, the 'Despicable Dude' I'm researching was allegedly almost lynched twice.

It is said that lynching as we know it took its name from from Lynch Law, usually attributed to Charles Lynch of Virginia. There are also those who claim it was William Lynch, also of Virginia, that should be accredited. Either way, there seems to be no evidence that either were responsible for the death of any person they sentenced. Lynch law was considered as imposing extrajudicial punishment.

In Colorado, lynching usually resulted in the death by hanging. In the book "Lynching in Colorado, 1859-1919" by Stephen J. Leonard, the author states there were 175 documented cases where a lynching occurred, although most agree there were more that were not documented.

As seen by this article from the Fairplay Flume Aug 30 1888, lynching was a much used word in the papers and for certain areas of Colorado, a not unusual, although not frequent, occurrence.

"The following special appeared in the Leadville Journal : Glenwood Springs, Aug . 24 .James Riland Sr., well known throughout Colorado, especially in Leadville, was shot through the breast by C . A . Babcock. The cause of the shooting is unknown. Babcock has given himself up . Jamea Riland Jr. has gone to his father's ranch to look after tbe old gentleman . It is said that lynching may follow if the wounds prove fatal."

Or this short notice in the Ft, Collins Courier from April 19, 1888

"A lynching took place at Cheyenne Wells, on Monday, a man named Franklin Baker being the victim. Baker had the day before killed two young men, named J . B . McConnell and John C . Morrison because in looking for land they bad crossed Baker's field contrary to his orders. Baker was hung to a coal chute a short distance from the depot."

A more complete story of lynching appeared in the Colorado Springs Gazette on July 28, 1877

"LYNCHING AT LA VETA . A dispatch from La Veta , dated last Tuesday, says: The jail guard at this place was overpowered last night by a vigilance committee, and Marcus Gonzales, the murderer of the Browns, taken from custody and lynched to a telegraph pole in the public square. The murder, which occurred near this place in November last, was one of the most brutal recorded in the annals of crime, an aged couple being the victims and money the incentive. Gonzales went to the house of the unfortunate family and asked to stay over night, and killed Mr. Brown while he was caring for his horse . Returning to the house the wretch killed Mrs. Brown and left their daughter, Mrs . Rice, for-dead, obtaining the paltry sum of four dollars for his butchery; The murderer escaped to New Mexico, but was hunted down by detectives and brought back here for trial, and upon a preliminary examination was positively identified by Mrs. Rice, who, pointing to Gonzales, said : You are the man who murdered my father and mother and nearly killed me. He was also suspected of several other murders. The lynching took place at 11 pm . About seventy five men participated. They were quiet and orderly but determined ."

The idea of lynching was not wholly accepted by the populace as evidenced by this piece in the Colorado Daily Chieftain from January 22, 1884.

:"The saddest thing about the Ouray lynching is the fact that it made an orphan of a little two year old girl. It is said that the people of Ouray endorse the action of the mob, but we predict that they will soon regret it. That act has placed a stigma upon Ouray which will require many years to outlive and wipe from the memories of law abiding people."

Yet, searching the early newspapers during the time my 'despicable dude' was suppose to be active show no reports of his being threatened with a lynching in the regions he was active in. Colorado has a history of extrajudicial punishment. An author friend had a relative who was 'lynched' in Canon City, Colorado. She has researched and written about the event, including the writing of a song.

As Colorado went from birth to statehood and beyond, it was paved with many events including lynching. Not pretty, not necessarily something you talk about, but a part of the history.

For those who want to find out more about Lynching in Colorado, the book mentioned above is a place to start. There is also those searchable resources such as 19th Century Newspapers, Newspaper Archives and Colorado Historic Newspapers.