MIND YOUR STATES, AND DATES! by Vonn McKee 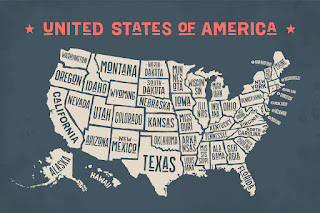 When plotting a new story or book idea, one of the western writer’s most important decisions is LOCATION. Will the story take place in the high deserts of Arizona or New Mexico? The Front Range of Colorado? The rolling plains of Wyoming? The geography can dictate the types of characters, weather, architecture, landscape, and historical events you intend to include.

But wait a minute. Is it Arizona you’re writing about . . . or Arizona Territory? Texas . . . or the Republic of Texas? The western “states” straggled into the Union, a few at a time, between the years of 1845 (Texas) and 1959 (Alaska). To make things even more confusing, much of the Midwest and some of the West once lay within the borders of the Louisiana Purchase. As a native Louisianian, I like to rib my Texas and Alaskan friends that my state was biggest, once upon a time. And what do you know? My current home state of Tennessee was once called the Southwest Territory!

For some states, the journey to statehood came with great difficulty and sacrifice. The Kansas-Nebraska Act which became law on May 30, 1854, established Nebraska Territory and Kansas Territory. The region was attractive to both the slave and free states, where tensions were building to a fever pitch. Settlers from both sides began pouring into Kansas, hoping to swing the vote when Kansas citizens decided where their loyalties lay. When the so-called “Border Ruffians” from Missouri arrived (planning to stuff the ballot boxes with pro-slavery votes), a period of extensive violence began, lasting until 1858. At the end of these “Bleeding Kansas” years, the Wyandotte Constitution was adopted, assuring the anti-slavery status of the future state of Kansas.

Oklahoma is another state with an eventful history leading up to its statehood. Always a Native American stronghold, the U.S. government’s relocation of several tribes to this region created an expansive “Indian Territory” adjoining Oklahoma Territory. The tribes agreed to let the government open up “Unassigned Lands” for settlement in 1899. As discussions of statehood escalated, executive officers of the “Five Civilized Tribes” proposed that Indian Territory be name the new state of “Sequoyah,” separate from Oklahoma Territory. However, the U.S. government ultimately decided to combine both territories and President Teddy Roosevelt signed a proclamation naming “Oklahoma” as the nation’s 46th state in 1907.

Of course, every state has its own unique and fascinating history. Fiction writers can develop plotlines and characters that correspond with those historic events, making for a more authentic experience for readers. For the research convenience of those writers, here’s a list of all fifty states, along with their dates of admission to the Union, year of first settlement, and former territorial names.