Have you ever heard of a folding shotgun? I hadn’t until I was introduced to the Burgess Folding Slide-Action Shotgun, made in the 1880s. 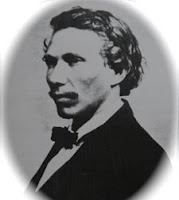 Andrew Burgess (1837-1908) was a photographer, arms inventor and manufacturer, who apprenticed with Mathew Brady in 1855. In late 1864, he undertook an extended tour of the war-torn South following the American Civil War, photographing as he went. He is said to be the one who took the photograph of President Abraham Lincoln that is used on our currency.


Burgess received his first patent (no. 119,115) on September 19, 1871 on an improvement to the Peabody rifle. In all, Burgess registered 894 patents. In addition to manufacturing his own guns, he produced designs for Colt, Marlin, and the Whitneyville Armory. He founded the Burgess Gun Company in Buffalo, NY, in 1893, to produce his folding shotgun. In 1899, Burgess sold the company to Winchester, who promptly discontinued production of folding shotgun, reportedly to eliminate the competition.

The folding slide-action shotgun went into production in 1884. It had a 6-round maximum load in the magazine below 19-20” barrel. The shotgun has an iron sleeve over the stock wrist that activates the bolt and breech mechanism when slid backwards. It’s hinged on the underside of the receiver with a lift lever on top to release the barrel so it can be folded. A waist holster was made to go with it with loops to secure it to a belt.

These shotguns could be purchased in in Arkansas, Texas, Oklahoma and New Mexico. It was advertised as being especially adapted for police service, express messengers like Wells-Fargo agents and shotgun messengers, U.S.

Marshals, prison and bank guards. Pat Garrett had one in his wagon the day he was killed.


The shotgun was also used by police and prison guards in New York. In 1895, a zealous gun showman and salesman arrived at the New York City’s Board of Police Commissioners office of Theodore Roosevelt with a Burgess folding slide-action shotgun concealed under his coat. He proceeded to pull the gun and fire six shots—blanks, thankfully--into the ceiling. An impressed Mr. Roosevelt placed an order for the guns for the guards at the Sing-Sing prison, among others.

See you next month!
Tracy
Posted by TracyG at 2:00 AM