How Roy Bean Made the National Limelight, and Saved a Heavyweight Prize Fight

The heavyweight boxing championship fight of 1896 was arguably the most controversial sporting event of all time, escalating at one point into an international incident that involved three great athletes, the Texas state legislature, an ambitious boxing promoter, U.S. marshals, Texas Rangers, the Mexican army, and last, but not least, an eccentric and entrepreneurial saloon keeper and part-time Justice of the Peace by the name of Roy Bean.

John L. Sullivan held his heavyweight championship title from 1882-1892. He is recognized as the last champion of the bare-knuckle fighters under the London Prize Ring Rules, and the first champion of the gloved boxers under the Marquess of Queensberry Rules. Sullivan is said to have won more than 450 fights during his career, finally losing the heavyweight title on September 7, 1892, in a fight with “Gentleman” Jim Corbett that lasted 21 rounds.

Corbett wasn’t interested in defending his title; instead, he used his champion status to put on theatrical “boxing” exhibitions from which he derived a substantial living.

An English boxer from Cornwall by the name of Bob Fitzsimmons held the U.S. middleweight title and began to fight as a heavyweight. He repeatedly challenged Corbett to a fight, but Corbett repeatedly refused, stating that Fitzsimmons wasn’t in his league as a fighter. Finally, in 1894, a boxing organization called the Olympic Club named Fitzsimmons the heavyweight champ because Corbett refused to fight, essentially forcing Corbett to fight Fitzsimmons to defend his title.

A gambler and boxing promoter in Dallas, Texas, by the name of Dan Stuart, saw an opportunity and started promoting the fight in an effort to bring it to Dallas. He arranged for special railroad fairs for people around the country who wanted to come to Dallas to see the fight. He even started plans for a fifty-two thousand seat arena to be called the Dallas Coliseum. Through his contacts with Dallas businessmen, Stuart was able to raise forty-one thousand dollars for the purse.

But there was opposition to the fight. The Dallas area clergy condemned the fight because they believed that it would draw the worse elements of society to the city. Other issues arose as well. Corbett was distracted by a very public and ugly divorce, and Fitzsimmons was about to go on trial for manslaughter, having killed his sparring partner in a boxing exhibition the previous year. Furthermore, the laws in Texas at the time were vague as to the legality of boxing.

The Governor, Charles Culberson, under pressure from the Dallas clergy, called the state legislature into a special session in October of 1895 in order to pass a law prohibiting boxing in Texas. The issue was settled once for all. The fight would not take place in Texas.

Stuart considered other states in which to hold the fight, but one by one they all turned him down. Governor Clarke of Arkansas went so far as to threaten to enlarge the state penitentiary to accommodate the crowds if Stuart brought the fight to his state.

To make matters worse for Stuart, Corbett decided to retire from boxing, believing that the fight was never going to happen. He relinquished his title to a little-known Irishman by the name of Peter Maher who had just fought Corbett’s sparring partner and knocked him out in sixty-three seconds. Stuart was now left with only one fighter and no venue for the fight. Things were looking pretty hopeless.

Fitzsimmons, who had been eager to fight Corbett, was furious about the champ bowing out of the fight, so he immediately challenged the new champion, Peter Maher, who accepted the challenge. Fitzsimmons and Maher had fought once before, in 1892, with Fitzsimmons emerging the victor. The fight was on once again. All they needed was a place to battle. The people of El Paso came to the rescue with a plan of their own.

When Texans want a fight, they will find a way. They knew that they couldn’t have the fight in Texas because of the new law, so, raising fifteen thousand dollars for the purse, their plan was to have the fight across the border in Juarez, Mexico.

Everything seemed to be falling into place. Fitzsimmons arrived in El Paso to begin training and Maher set up his training camp not far away in Las Cruces, New Mexico. The spectators started pouring into El Paso, and with them came a contingent of law enforcement, including U.S. marshals and thirty-two Texas Rangers, to make sure that the fight didn’t take place in Texas.

No one had considered asking Mexico what they thought about having the fight in Juarez, but they found out when the Mexican government sent 150 soldiers to Juarez to keep the championship bout out of their country. Once again, the fight had no venue.

The eccentric saloon keeper/Justice of the Peace from Langtry, Texas on the Rio Grande said that he would guarantee a venue for the fight that would satisfy everyone.

Stuart kept the location of the fight a secret and arranged for a special train to carry the spectators, sportswriters, gamblers, and lawmen from El Paso to the location of the fight. On February 20th of 1896, passengers loaded onto a special ten-car Southern Pacific train, paying twelve dollars each ($300 in today’s money), to head east toward a secret destination. It wasn’t until the train stopped in Langtry that anyone knew where they were going. 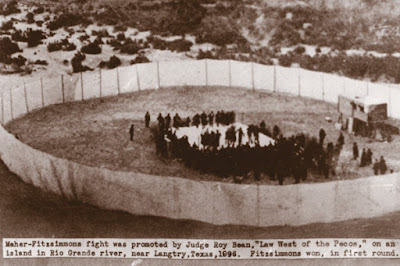 Bean, always the entrepreneur, had arranged for a train from San Antonio to deliver a fresh supply of beer, which he sold for a dollar a bottle ($25 today) to the thirsty spectators. Then he directed them to the Rio Grande where he had set up a boxing ring on a sand bar in the middle of the river. He had constructed a canvas wall around the ring to discourage any non-paying on-lookers who couldn’t afford the twenty-dollar price of admission. However, the canyon walls of the Rio Grande rose up high enough so that many people who couldn’t get a seat inside the canvas wall were able to climb up on the heights to get a free show. The Texas Rangers, who had accompanied the train, stood along the banks of the Rio Grande at the extent of their jurisdiction.

The fight had been gestating for four years. After months of preparation, after spending thousands of dollars on promotion, after bouncing from one city to the next not knowing where the fight would take place, after overcoming special legislation and special interest and armies of soldiers and law enforcement, the fight was finally happening…and it ended in ninety-five seconds with a knockout by Fitzsimmons.

(Author’s note: The very next fight by Fitzsimmons in December of 1896 was almost as controversial, but for different reasons, and involved another Wild West icon. You can read about it in one of my previous articles here.) 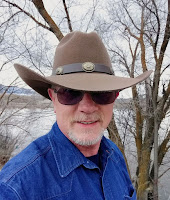 Mike describes himself as Conservative, Christian, Pro-life, and Pro-gun. He is a drinker of copious amounts of coffee. Happily married to his redheaded sweetheart, Tami, they live in the mountains of western Montana. He is a writer of Western short stories and humorous fiction and has been published in a number of anthologies and magazines. His first novel, The Sons of Philo Gaines, is scheduled for release in May of 2020. You can visit his blog at:
http://michaelrritt.blogspot.com
and his Facebook page at:
https://www.facebook.com/MichaelRRittAuthor.