(The following story originally appeared on my own blog and is about a controversial – but little-known incident in the life of an iconic western figure. I am a huge fan of Paul Harvey, and this story was written in the style of his The Rest of the Story radio program. My sincerest apologies to Mr. Harvey.)
It was a Wednesday afternoon, December 2nd, 1896, and J.J. Groom and his associate, John Gibbs hurriedly walked across the busy San Francisco street, dodging horses and carriages as they made their way to the Baldwin Hotel. The two men were desperate and were hoping that one of the hotel’s guests would be able to help them out.
Groom and Gibbs were boxing promoters and had arranged for the Heavyweight Championship boxing match to take place that very night between Bob Fitzsimmons and Tom Sharkey. There hadn’t been a championship bout since the reigning champ, James Corbett, retired the previous year.
In the closing years of the nineteenth century, baseball was only about fifty years old; the first college football game between Rutgers and Princeton had been played only thirty years ago, and a new game that was being called “Basketball” was still in its infancy. Boxing, however, had been around as a sport for thousands of years. And this fight between Fitzsimmons and Sharkey was the most anticipated boxing match in the country. 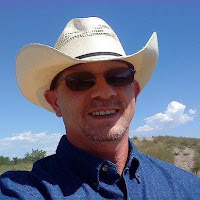 Mike describes himself as Conservative, Christian, Pro-life, and Pro-gun. Drinker of copious amounts of coffee. Happily married to his redheaded sweetheart, Tami. They live in the mountains of western Montana. He is a writer of western short stories and humorous fiction and has been published in a number of anthologies and magazines. You can visit his blog at http://michaelrritt.blogspot.com and his Facebook page at https://www.facebook.com/MichaelRRittAuthor.
Posted by Michael Ritt at 12:00 AM