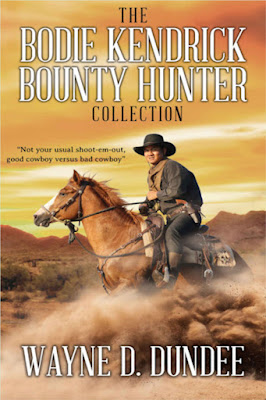 Bodie Kendrick is a tough but humane bounty hunter. Sometimes he finds his personal sense of justice at odds with the claims on a Wanted poster. But once he decides a fugitive deserves to be taken in, he'll see the job through—even if it means delivering his prisoner belly-down over a saddle.

In that sliver's worth of distraction, Veronica saw the only opening she was likely to get. With desperate suddenness, she yanked the Greener free. Whirling, thumbing back the hammers as she dropped into a slight crouch, she braced the stock solidly against her right hip and pulled both triggers at once. The barrels roared a ground-shaking report and the twin ten-gauge loads hit Tully square in the chest, nearly tearing him in half, lifting him two feet out of his saddle and depositing him like a shredded, leaking bundle of rags on the ground three full yards away.
The kick of the sawed-off knocked Veronica to the ground also, dumping her unceremoniously on her rump, legs splayed wide in front of her, her head and shoulders threatened by the nervously shifting legs of the chestnut Kendrick was suddenly fighting to keep under control.
Stung by stray buckshot, Tully's now riderless horse was screaming in alarm and rearing high on its back legs. Mort's and Butch's horses were reacting wildly as well, bucking and wheeling away even as the two men tried to aim shots at Kendrick and the woman. Guns cracked, bullets whined harmlessly wide and high. Mort and Butch cursed.
From where she sat in the dirt, Veronica frantically reached to draw Kendrick's Colt from the holster of the gun belt she’d stripped away only moments ago. Twisting at the waist, shouting "Kendrick!,” she tossed the revolver up and back in a flat arc. The bounty hunter's big hand flashed out and closed solidly around it.
Mort and Butch were still trying to get their horses settled down and shoot at the same time.
Kendrick's first bullet hit Mort in the right hip; his second one, a split second later, hit higher, just under the right armpit, and knocked the Circle G man out of his saddle.
Butch, in the meantime, got off two more wild shots.
Kendrick's aim shifted. His third bullet caught Butch in the pad of muscle just above his left collarbone. Butch toppled away with a loud grunt of pain.
It was over. A matter of seconds.

You can pick up this exciting collection by Wayne D. Dundee at Amazon for only 99 cents!